‘I don’t know when this pain will ever cease’ 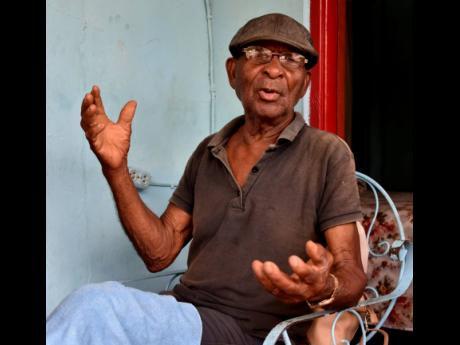 The image of the blood-drenched body of 15-year-old murder victim Kimanda Smith still haunts 87-year-old Clevan Edwards. Kimanda, her three siblings, and their mother, Kemesha ‘Reds’ Wright, were found with their throats slashed at their New Road...

Kimanda, her three siblings, and their mother, Kemesha ‘Reds’ Wright, were found with their throats slashed at their New Road home in Cocoa Piece, Clarendon, on Tuesday.

Edwards, landlord and neighbour of the victims, said the horrific scene has scarred his mind and caused him much trauma.

He said that he became curious after Wright’s brother, who made the chilling discovery, ran from the premises shouting, “A bare dead people over Reds’ yard. Everybody dead off over deh!”

With tears streaming down his face, Edwards recounted the moment he saw Kimanda’s body in a back room.

“When mi look, mi see the big daughter lay down straight out pan her belly. Mi a tell yuh, I couldn’t reach any further. Mi have to just turn back same time,” he said.

Investigators theorise that all five – including Sharalee Smith, 12; Rafaella Smith, five; and 23-month-old Kishawn Henry Jr – were attacked while they slept.

Kimanda was a student at the Achievers’ Multi-Resource Centre in May Pen.

The school’s principal described her as a math enthusiast, who was set to collect two awards at the school’s graduation ceremony today.

As he struggled for words, Edwards said he was still shaken to the core.

The neighbour said that Wright was loving, well-mannered, and got along well with everyone in the usually quiet community.

“Mi and she live good. She was a nice girl. Mi never hear har and nobody mouth meet.” Gwendolyn, who lives next door, said she was shocked to hear that the mother and her children were murdered, as she did not hear anything alarming transpiring.

Wright was a practical nursing student at Distinction College in Spanish Town. The institution, in a social-media post, said she was a brilliant student who was scheduled to sit examinations on Friday. Students and staff are devastated by her death, the school said.

A floral wreath that hung at Wright’s gate Wednesday bore testament to the tragedy that unfolded a day earlier. Across the street, friends gathered, still trying to make sense of the horrific act that rocked their community.

For Oliver Chambers, a long-time friend of the family who was fond of the children, the callous crime was unfathomable.

“Right now people hardly can cope, hard fi cope with a situation like this. Right now, mi a tell you di truth, mi woulda need that perpetrator round here fi get fi deal wid him,” he said.

The incident, he said, will forever change how the community embraces strangers.

Roshane Barnett, the person of interest detained late Tuesday, reportedly did not blend into the community.

Barnett, a cousin to Wright, hailed from Wilson’s Run in Trelawny and was caught while packing bags to leave.

“Any stranger we see round here right now, dem haffi can talk up. We nuh need nuh strangers round here. Dem have to explain demself,” Chambers said.

- Cecelia Campbell-Livingston contributed to this story.