US hits Russia with new sanctions over Ukraine,tensions soar 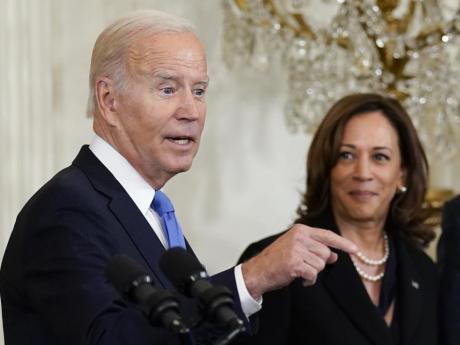 President Joe Biden responds to a question about Russia during a reception to celebrate the Jewish new year in the East Room of the White House in Washington, Friday, September 30, 2022. Vice President Kamala Harris listens at right. (AP Photo/Susan Walsh)

WASHINGTON (AP) — The United States and its allies hit back at Russia's annexation of four Ukrainian regions on Friday, slapping sanctions on more than 1,000 people and companies including arms supply networks, as Moscow and the West escalated an already heated conflict fraught with potential nuclear implications.

US officials said they would support any effort by Ukraine to retake the annexed territories by force, setting the stage for further hostilities.

And Ukrainian President Volodymyr Zelenskyy announced that his country would make an “accelerated” bid to join NATO, a plan not endorsed by the US or other allies that could add fuel to the fire.

Russian President Vladimir Putin's announcement that Russia is incorporating four Ukrainian cities and areas was not unexpected following referendums this week that the West had denounced as shams. And the US and Western allies had previewed what their reaction would be.

Crisis 60 years ago during the Cold War.

“Make no mistake: These actions have no legitimacy,” President Joe Biden said in a statement shortly after Putin's vow to defend the newly annexed portions of Ukraine as if they were Russia's sovereign territory.

Biden had spoken out against the annexation plans last week at the UN General Assembly, where a vast majority of other members also voiced support for respecting the territorial integrity of all nations.

While the Biden administration has identified the sources of Russia's weapons and battlefield high-tech as a priority, many of Friday's other sanctions were in line with penalties already enacted on thousands of Russian individuals and companies and may have comparatively little impact on the war effort.

The administration hopes they will serve to further undermine support for Putin's invasion among Russia's elite.