US reports 1st case of omicron variant in returning traveller 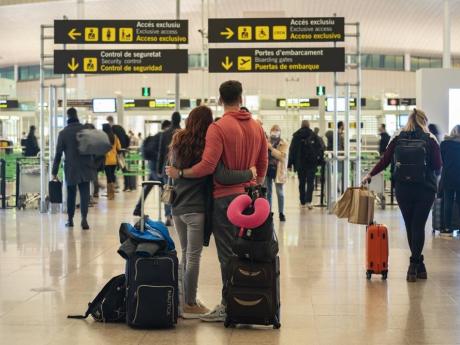 A couple stands outside the security control section inside a terminal of the Barcelona Airport, Wednesday, December 1, 2021. (AP Photo/Joan Mateu Parra)

SAN FRANCISCO (AP) — The United States recorded its first confirmed case of the omicron variant Wednesday — in a vaccinated traveller who returned to California after a trip to South Africa — as scientists around the world race to establish whether the new, mutant version of the coronavirus is more dangerous than previous ones.

“We knew it was just a matter of time before the first case of omicron would be detected in the United States,” he said.

The infected person was identified as a traveller who had returned from South Africa on November 22, developed mild symptoms and tested positive Monday.

Researchers at the University of California, San Francisco obtained a sample from the patient Tuesday evening and worked feverishly overnight to assemble the genetic sequence.

The person, who had had the two doses of the Moderna shot but had not been vaccinated long enough to receive a booster shot, is improving and agreed to remain in quarantine, California officials said.

All the individual's close contacts have been reached and have tested negative, officials said.

The patient was identified only as being between 18 and 49.

At least 23 other countries have reported omicron infections since South African authorities first identified the variant a week ago — an announcement that led the US and many other countries to almost immediately bar airline travellers arriving from southern Africa.

But the variant is still surrounded by many unknowns, among them: Is it more contagious than other versions, as some scientists are beginning to suspect? Does it make people more seriously ill? And can it evade the vaccine?

“Any declaration of what will or will not happen with this variant, I think it is too early to say,” Fauci said.

He and other medical experts strongly emphasised that Americans should continue to follow public health advice to get vaccinated and get their booster shots.

“If you look at the things we have been recommending, they're just the same,” Fauci said.

Genomic sequencing on the patient's virus from UCSF was confirmed by the Centers for Disease Control and Prevention.