12-year wait pays off for wife of former PM 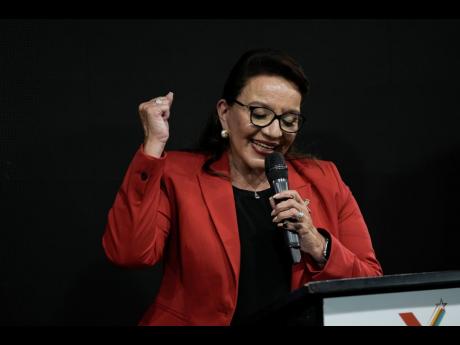 If preliminary tallies from the election on Sunday are confirmed, Castro de Zelaya would become the Central American country’s first female president.

Her victory would also mark the return of her family to the presidential residence that they were ousted from in a 2009 coup.

The 62-year-old, three-time candidate has long said, “the third try is the charm”.

She grew up in the capital, Tegucigalpa, but moved to her husband’s rural province of Olancho, known for its cattle ranches, when the couple wed.

Together they raised four children, and during her husband’s 2006-2009 tenure, she played a relatively minor role, overseeing programmes for women and children.

But it was after the 2009 coup, which forced her husband into exile, that Castro de Zelaya came to the forefront. With Mel Zelaya running a sort of government in exile in Costa Rica and later in Nicaragua, it was up to his wife to lead the string of protests demanding his return and re-instatement.

By the time Zelaya formed the Libre, or Free Party, Castro de Zelaya’s popularity was evident among followers of the movement. Besides, the country’s constitution prohibited her husband from running for re-election.

Since 2013, the first time she ran, Castro de Zelaya has been the principal thorn in the side of Juan Orlando Hernández, the current president who won elections in 2013, and then gained the blessings of the country’s supreme court to run for re-election in 2017.

Castro de Zelaya ceded her candidacy in 2017 to Salvador Nasralla, a TV personality who ran at the head of an opposition coalition and claimed to have narrowly defeated Hernández.

After a protracted election filled with irregularities in 2017, protesters filled the streets and the government imposed a curfew. Three weeks later, Hernández was declared the winner, despite the Organization of American States observation mission calling for an election rerun. At least 23 people were killed.

Since then, Castro de Zelaya’s movement has focused laser-like on getting Hernández out of office.

Hernández became a national embarrassment, with US federal prosecutors in New York accusing him of running a narco-state and fuelling his own political rise with drug money. Hernández has denied it all and has not been formally charged, but that could change once he leaves office.

Castro de Zelaya sees it as a campaign to free her country.

“Honduras has been described as a narco-state because of the mafia that governs us, and we have also been described as the most corrupt country in Latin America,” Castro de Zelaya said at a recent campaign event. “People of Honduras, now is the time to say enough of the misery, poverty and exclusion that our country suffers.”