Gov’t to accord state funeral to former PM 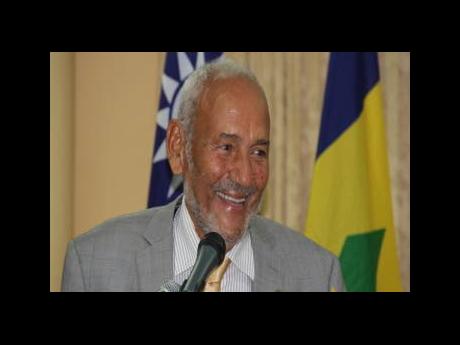 The St Vincent and the Grenadines government Tuesday expressed condolences to the family of Sir James Mitchell, the country’s second prime minister, who died here at the age of 90.

A statement issued by the Office of the Prime Minister said that “as a mark of respect, all flags throughout the State will be flown at half mast from Tuesday to Thursday and on the day of the funeral.

“Sir James will be accorded a state funeral, details of which will be provided in a subsequent announcement,” the statement said.

Sir James, who had represented the Northern Grenadines constituency for more than 33 years, served as prime minister from 1984 to 2000. He also served as premier from 1972 to 1974 and was the founder and president of the main opposition New Democratic Party (NDP).

Sir James, who was popularly known as ‘Son Mitchell’, died five days after being discharged from the Intensive Care Unit of the Queen Elizabeth Hospital in Barbados, where he had been taken after falling ill at his home in Bequia, on October 30.

He was initially diagnosed, in Bequia, as having a gallstone, but was brought to the capital, Kingstown, where doctors said he had an infection.

Barbados Prime Minister Mia Mottley, in a statement, said, without a doubt, Sir James has served well the people of his country, as well as the people of this region.

“In fact, it ought not to be lost on us today, as we reflect on his life, that Sir James was first elected to the Parliament of St Vincent and the Grenadines in 1966, the same year that Barbados became independent and very early in a period when West Indians began with earnest to assert their right to sovereignty.

“As premier from 1972 to 1974, and prime minister from 1984 to 2000, Sir James was an integral part of the regional leadership that did so much to shape the Caribbean we know today.”

Mottley said that, for all his regional recognition, though, Sir James knew well the meaning of the phrase “all politics is local”.

“Just six years after becoming an MP, he ran as an independent candidate representing the Grenadines constituency and won in an election that ended in a 6-6 tie. By the time the negotiations were concluded, Sir James was the premier of St Vincent and the Grenadines.”

Mottley said that, even though it has been more than three decades since Sir James contested his last election, he remained a towering figure in the affairs of the Eastern and Southern Caribbean.

“At the personal level, I visited Sir James while he was being treated at the Queen Elizabeth Hospital and was warmed by the fact that, despite his illness, the personality and spirit I have known for so long were still there.

“I have always been fascinated by his ever-present charm and wit, qualities that were equalled only by his knack for storytelling. I will always treasure my many years of travelling to Bequia and the privilege of communicating with him.

“We shared a passion for the Caribbean Sea and together recognised that, with the right vision, it was more of a cord that bound us together than a gulf that separated us. I will forever cherish the moments we spent together,” Mottley added.