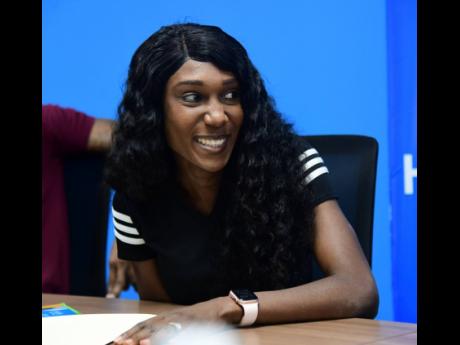 Gladstone Taylor
Natoya Goule Toppin is all smiles at the signing ceremony where she was announced the brand ambassador for the Recycling Partners of Jamaica, yesterday.

FOLLOWING SUBPAR performances in her last two races, reigning national 800m champion Natoya Goule said she is now refreshed and ready to defend her title at the JAAA National Senior and Junior Championship, which is scheduled to begin today at the National Stadium.

Goule, the fastest Jamaican in the event this year with a time of 1:59.31 seconds, is coming off a disappointing sixth-place finish at the Oslo Diamond League on June 16 in Norway.

She told The Gleaner she had got a lot of rest since that last race and was now ready to put on a good showing in front of her home crowd.

“I am feeling a lot better because the last couple of races that I ran, I think that I was a little tired,” said Goule.

She was speaking after being announced the new brand ambassador of the Recycling Partners of Jamaica yesterday.

“Whenever, I come to Jamaica it is like I have this boost of energy and so going into Trials, I am looking forward to racing better and to have a better time and to be the national champion again,” she said.

“It is important for me to do well here not just winning but also to run a good time,” Goule said.

The 31-year-old Goule finished sixth in the final of the event at the 2019 World Championships in Doha, Qatar. She followed that up with an eighth-place finish at the Tokyo Olympic Games in 2021.

The former Manchester High School athlete, who holds the national record in the 800m with a time of 1:56.15, pointed out that her preparations are ahead of schedule this year.

“I ran faster than where I was this year compared to last year because last year before the Trials my fastest time was 1:59.8 and this year it is 1:59.3,” she said.

“I am actually ahead of where I was last year and I finished out the season running 1:56 and so I am not worried because I know what I am capable of doing,” she said.

Goule stated that she is also looking to lower her personal best mark in the event this season.

“That is the aim for me to lower my personal best time because I know that I am in the shape for it but also you have to be in a race that is setup for you to run that,” she said.

“Many times you are in the shape to run super fast but the race was not set up like that so I am hoping that I will be able to run a PR [personal record] this year,” Goule said.

The women’s 800m event is scheduled to run off on Sunday. Goule is expected to face stiff competition from Chrisann Gordon-Powell, who is the second fastest Jamaican in the event this year with a time of 1:59.52.