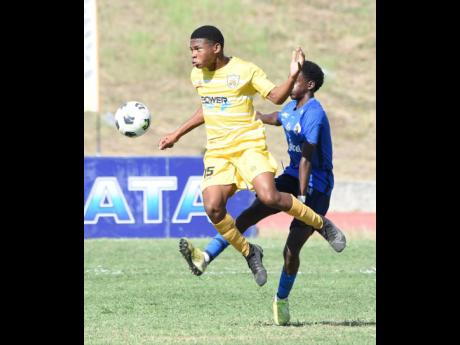 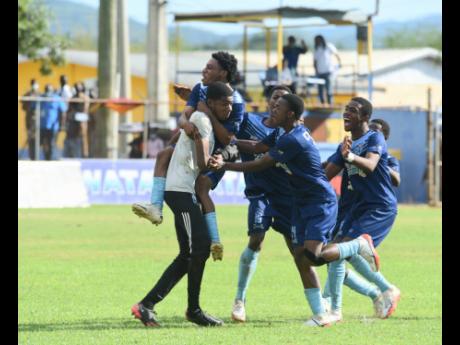 Ashley Anguin
Manning’s High School goalkeeper Mikhail Romans (left) is swarmed by his teamates after they defeated Dinthill High School in a penalty shootout in the daCosta Cup semi-finals on January 12.
1
2

It is a day of two finals as in the curtain raiser at 1 p.m., hosts STETHS and Edwin Allen High School battle for the ISSA Ben Francis KO Cup.

Veteran coach of Manning’s, Everton Tomlinson, is confident that his boys will turn out their best performance to date in the final to lift their first title in the 283- year-old history of the school.

“I have no doubt we are going to come up big. I think the boys will come out and play to their potential because I’m yet to see the great and attractive football we can play. I am hoping this will be the day,” Tomlinson said.

“The players on the Garvey Maceo team show a lot of confidence, and you can see that they are more mature. Although we don’t have that Premier League experience and not a big team, we have big hearts. The difference will be how tactically educated we are and how we use the space on the football field both offensively and defensively,” he added.

Despite being one of the most exciting teams in the competition going forward with returns of 29 goals in 10 daCosta Cup games so far, the second-oldest school in Jamaica will have to be tight in defence after conceding eight goals in those games.

Merron Gordon, coach of Garvey Maceo, has his sights set on winning all the age-group trophies available with the same group of boys, which he believes would be a great achievement.

Garvey Maceo, the 2007 champions, came into the season as genuine title contenders after their squad comprised players who would have won the under-14 and 16 all-island titles in 2019.

“We are approaching the game positively. Manning’s are a tactical team, so we have to be aware of that. We have to go out, execute, and play as hard as we can for 90 minutes,” Gordon said.

“Yes, we have experienced players (Gregory Cousins and Cleo Clarke) that played in the Jamaica Premier League (last season). However, I have confidence in the entire team as these players won the under-14 and under-16 in 2019, and it’s good to have winners all around to lift the expectation of the entire team. It’s always good to win right through with a group of boys, so we will be going for it,” he added.

The Cubans, as they are affectionately called, stopped parish rivals Clarendon College from defending their title for a third time with a 3-2 win last Wednesday at the same venue.

The school. located in Gimme-Me-Bit, Clarendon, has been the most lethal in front of goal. They have scored 38 goals in 10 daCosta Cup games and while conceding just four.

The Ben Francis final is also expected to be exciting. Edwin Allen will be going into the game high on confidence from their 4-0 win in the semi-finals and would want to ride that momentum to their first-ever schoolboy football title. STETHS, however, can draw inspiration from the fact that they are six-time champions dominating the knock-out cup in the years 2010-15 and want to get back to winning ways.