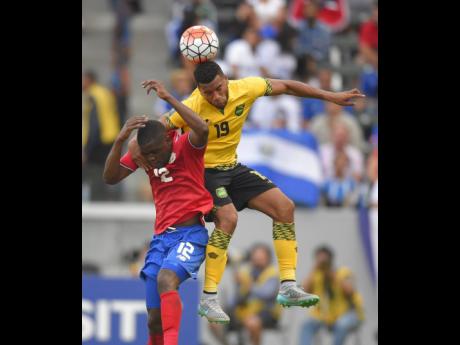 AP
Jamaican defender Adrian Mariappa (right) jumps to head the ball in a challenge with Costa Rica's Joel Campbell during the second half of a CONCACAF Gold Cup soccer match in Carson, California.

REGGAE BOY Adrian Mariappa has joined Australian club Macarthur Bulls and says he is looking forward to the challenge of playing in the A-League.

The British-born Mariappa, whose maternal grandparents are Jamaica, began his Jamaica debut in 2012 and since then has made 57 appearances for his home side, which he has captained on seven occasions.

The 35-year-old veteran defender said he was excited to be joining the Bulls and playing in the A-League for the first time.

“I want to thank the owners and the football staff for having faith in me and making this happen. When the opportunity to join the Bulls arrived, it was one I couldn’t turn down. It’s an exciting new challenge for me in my career and that for me is what I thrive off,” he said.

“I’m hungry to achieve great things with the club and create new memories with the team and the fans.”

Head coach Ante Milicic said he was thrilled the club has been able to secure a player of Mariappa’s quality and experience.

“Although he has never played A-League before, I’m most certain he will make a seamless adjustment given the career he has had so far,” Milicic said.

“I’m looking forward to seeing Adrian settle into the squad and contribute to the team throughout 2021-22 Isuzu UTE A-League season.”

Macarthur FC currently sit fourth in the rankings with one win and one draw from their two matches so far.