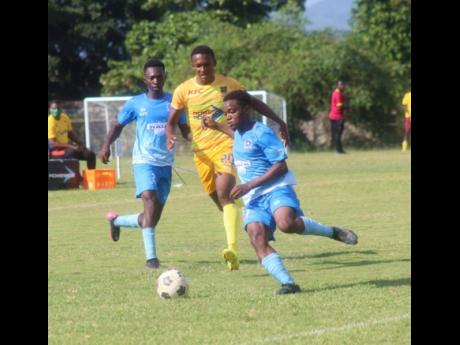 STETHS took the lead 16 minutes into the game when Zamario Douglas stunned Lacovia with a beautiful volley. Nickardo Smith extended the lead in the 36th minute to see them at 2-0 up at the break.

The second half saw a changing of the guard as Lacovia disrupted STETHS’ possession game and took the game to the host with piercing counter-attacks. The visitors reaped rewards in the 72nd minute when Kimarley Myers cut the deficit.

They continued to push for an equaliser, but the hosts managed to hold on for all three points.

STETHS’ assistant coach, Davion Dennis, said while they are happy for the three points, he is concerned about their performances. However, he noted that soon they will have to get the entire 90 minutes right as it is now do or die.

“The performance was not the best but we are happy to get the three points. Today (yesterday) we played a good first half, but lost it in the second half. We were all over the field and yet to settle down. There are concerns because we have gone four matches and still have not played like STETHS,” said Dennis.

“The next game is a must-win, so we will get things right. Injuries are running us ragged right now,” he added.

Lacovia’s coach, Fitzroy Ambusely, believes that despite the loss they can still make it to the next round, should they win Saturday’s game.

“We started a bit slow but picked things up in the second half. We just have to build on our second-half performance for the next game. We are always confident about what we are doing. We lost narrowly in these two games, it’s just for us to execute our game plans perfectly,” Ambusely said.

STETHS are level with B.B. Coke on seven points and sit third in the six-team zone C standings. Lacovia, with six points, lie fourth and are level on points with Maggotty High, who upset B.B. Coke 1-0 in the late game at STETHS. Munro lead the zone with nine points.