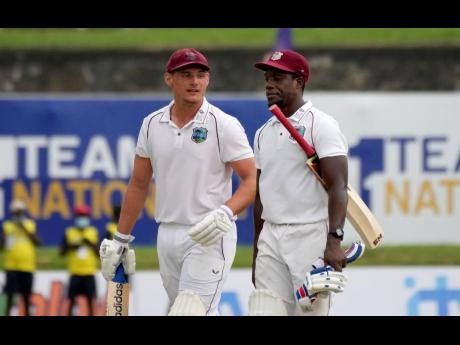 AP
West Indies batsmen Joshua Da Silva (left) and Nkrumah Bonner walk back to pavilion as the play stopped due to bad light during the fourth day’s play of the first Test cricket match against Sri Lanka in Galle, Sri Lanka, yesterday.

WEST INDIES cricketer Nkrumah Bonner said the team was unhappy with its batting performance on the fourth day’s play of the first cricket Test match against Sri Lanka in Galle yesterday.

Set a fourth innings victory target of 348, the Caribbean side closed the day on 52 for six, still needing a whopping 296 runs to win the first Test, this after Sri Lanka declared their second innings on 191 for four yesterday.

Jamaica’s Bonner (18 not out) and wicketkeeper Joshua Da Silva (15 not out) represented the last real hope for the visitors, who once again succumbed to spin, with off-spinner Ramesh Mendis doing the damage with four wickets for 17 runs in 11 overs.

As a matter of fact, the West Indies were at one stage on 18 runs for six wickets, until Bonner and Da Silva stopped the haemorrhaging with an unbroken 34-run, seventh-wicket stand.

Earlier on the fourth day, captain Dimuth Karunaratne followed up his first-innings 147 with an impressive 83 to help the Sri Lankans to a formidable second innings total of 191 for four declared. Former captain Angelo Matthews weighed in with an unbeaten 69, as spinners Rahkeem Cornwall (2-60) and Jomel Warrican (2-42) claimed the wickets.

Bonner summed up what was a difficult fourth day.

“Everyone is disappointed and it’s the nature of the sport. People will get out in cricket and that will happen. It’s up to me and Josh and the rest of the batters to get the job done,” he said.

“We have about 640 balls to bat and we want to play each ball on its merit. We have to also respect the bowlers and put away the bad balls. The plan is simple, bat time and score as many runs as possible,” added Bonner.

“The Sri Lankans would have played here all through their career so they know what’s happening. They know how to bat, bowl and approach the situation,” he reasoned. “We have come here for a few weeks and we all have to adjust. All I can say to the Caribbean fans are to keep praying for us and cheering us on.”

In spite of the collapse, Bonner says the morale is still high inside the team dressing room.

“The environment is well. Everybody is living as a family and it’s the best I have seen it from I have been playing for the West Indies. The energy is also right.”