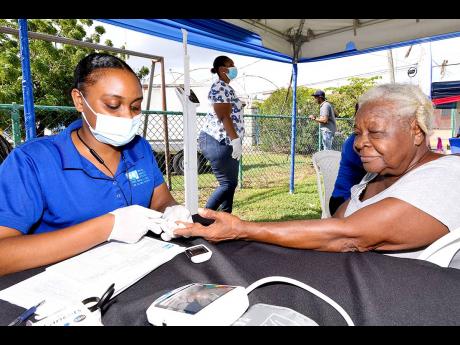 Even though 81-year-old Headley Henry was unable to walk unassisted, he was among the more than 500 community members from Rose Gardens and Parade Gardens who turned out to the Project STAR’s community link-up which offered various services including medical checks, job training enquiries and application for birth certificates.

“I was able to do my health checks, such as my blood pressure and it is normal. They also weighed me,” said Headley who is from Barrett Street in downtown Kingston.

Seventy-eight-year-old Boris Cousins also expressed similar sentiments. “I usually attend the clinic nearby, but they do not offer all the services, so I’m glad for this community outreach as I was able to do my blood pressure, diabetes and cholesterol checks,” she said.

Saffrey Brown, project lead at Project STAR, said that the aim of the community link-up was to engage community members by offering critical services, such as medical checks, showcasing job training opportunities and sporting activities.

“With our partners onboard we were able to provide information on recruitment being offered through the Jamaica Constabulary Force (JCF), training through the HEART Trust/NSTA and application for birth certificates through the Registrar General’s Department (RGD) and encourage interactions among community members through football and other sporting games,” said Brown.

Stephanie Lindsay, senior superintendent of police at the JCF, said that the police was happy to be part of the initiative.

“When I see [feuding] community members coming together, playing football and basketball, it is an indication that if communities are provided with the right environment and right support then even people who are odds can come together,” she said.

PARTNERS IN THE INITIATIVE

Meanwhile, partners in the day’s outreach say it was a success. The HEART Trust/NSTA featured its Amber HEART Stony Hill Academy focusing on coding and programming; its JGAS automotive school, which focuses on automotive and engine systems, and its Leap Centre, displaying its art and craft and jewellery-making training.

“We had a wonderful day and we are encouraging our young people to understand that skills pay the bills,” said Kimberly Bell, programme coordinator, HEART Trust/NSTA .

Chiecquel Parrish, a resident of Rose Garden knows only too well the importance of education. Even though she holds a bachelor’s degree she was enquiring about learning a skill. “Most of the booths have been informative so far, but I’m interested in the areas of automotive and to have a skill in that area that would be an icing on the cake for me,” she said.

Launched in July 2022, Project STAR (Social Transformation and Renewal) is a social and economic development initiative created by the Private Sector Organisation of Jamaica (PSOJ) in partnership with the Jamaica Constabulary Force (JCF) and driven by communities to bring about transformation starting at the community level through targeted interventions in under-resourced areas of Jamaica.