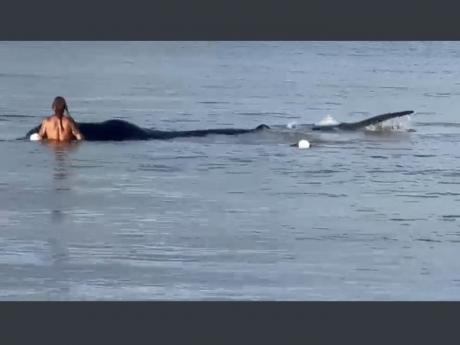 Two attempts have been made so far to get the whale out to sea.

Environment stakeholders in Negril, Westmoreland are currently working with representatives from the National Environment and Planning Agency (NEPA) to get a distressed sperm whale back out to sea.

The whale became beached near the Azul Beach Resort.

News of the animal's plight emerged this morning after a video was posted on social media showing an unidentified swimmer attempting to help the whale which appeared to be floundering in the water.

Although details of how the whale got beached remain unclear at this time, NEPA Regional Manager Tamara Woodit told The Gleaner that so far two attempts have been made to turn the animal in the direction of the ocean.

“The animal is now being escorted out to sea, and they were able to turn its head to deeper water, and it started to move on its own. This is the second time now so hopefully it does not beach because it came in twice,” said Woodit.

It is understood that NEPA's ecosystems branch is making efforts to get help in directing the whale back out to sea.

This is not the first time a whale has been beached near Jamaica's shores, as a similar incident occurred at the RIU Club Ocho Rios in St Ann in 2015.

The whale in that incident was treated for injuries and was subsequently released back out to sea.