Earth Today | Forest Trek 2022: A window into the world of forests 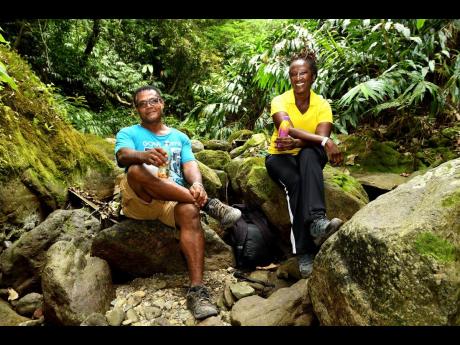 Contributed
Two trekkers share a photo moment after completing the trail through sections of the Blue Mountain Forest Reserve in St Andrew in 2019. 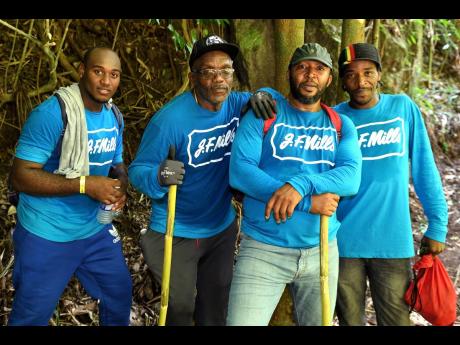 Contributed
Members of the JF Mills team pose for the camera following the hike in 2019. 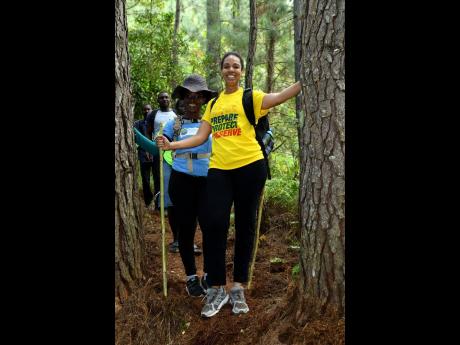 Contributed
Trekkers pause for some lens time while making their way through a section of the Blue Mountain Forest Reserve in 2019. 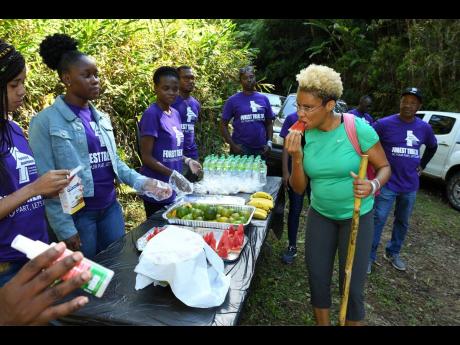 Contributed
Below: A trekker enjoys a slice of melon at one of the rest stops along the trail during a previous Forest Trek. 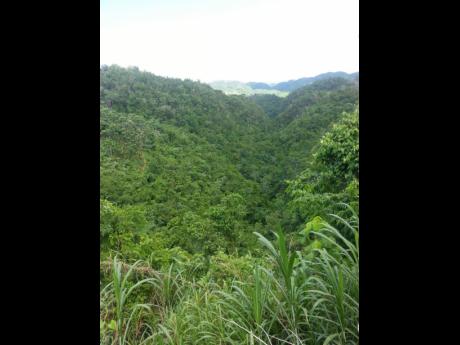 LOCALS AND visitors alike will this weekend have the opportunity to experience first-hand the beauty of Jamaica’s forests while deepening their appreciation for the ecosystem benefits of these critical natural resources.

This is being made possible with the 12th staging of Forest Trek, scheduled for Saturday, June 25 and comprised of a 12-kilometre hike through sections of Orchard Forest Reserve in North Eastern St Andrew. The hike will begin at the Mavis Bank Coffee Factory and end in Guava Ridge, with a ‘transportation-included’ option available to participants.

According to the Forestry Department, which is organising the hike, persons who choose the transportation-included option will be transported via buses to and from the start and finish points on the day.

“Participants will meet the buses at the meeting point (to be confirmed) in Papine, St Andrew, where parking is provided free of charge. All hikers must gather at the checkpoint located in the parking area at 5:30 a.m. At the checkpoint, participants will be boarded on buses and dispatched to Mavis Bank for the start of the hike,” explained the department through its website.

The hike will allow participants to enjoy picturesque views of the natural forest, and plantations of Pinuscaribaea (Pine), Eucalyptus globulus (Eucalyptus) and Hibiscus elatus (Blue Mahoe).

“At Governor’s Bench and Mount Rosanna, located at an altitude of 4,000 feet, trekkers will have panoramic views of Yallahs, St Thomas, as well as Kingston and Port Royal. Along the trail (after about 3km), hikers will be able to stop to plant trees on a denuded section of the forest reserve,” boasts the Forestry Department.

“After the 12-kilometre walk through the forest, trekkers will enjoy lunch and then board buses for the return journey to Papine. Persons who drove to the event will be able to retrieve their vehicles at this location,” the department added.

Orchard Forest Reserve is comprised of a mixture of forest types, including patches of natural forest and plantations of pine, eucalyptus, and blue mahoe. Some 148.2 hectares of land, which is now known as the Orchard Forest Reserve, were passed to the Forestry Department in the late 1980s for management.

“Data from a bio-physical inventory conducted in 2015 by the Forestry Department indicated the presence of at least 83 species of plants in the area. Unfortunately, the forest reserve is frequently affected by fires and is still recovering from a fire which occurred in 2015 and affected 95 per cent of the forest reserve,” the department noted.

Meanwhile, with the weight of the climate threat facing countries, including Jamaica and others of the Caribbean, the planting and preservation of forests has never been more important.

“They combat climate change because of their capacity to remove carbon from the atmosphere and store it, which is called forest mitigation. This avoiding and reducing emissions of heat-trapping greenhouse gases into the atmosphere, which prevents the planet from warming to more extreme temperatures, is also called climate change mitigation,” noted the United Nations Environment Programme (UNEP) in an article covering the subject.

Also according to the UNEP, forests, which cover a third of earth’s land mass, support the livelihoods of some 1.6 billion people globally, serve, too, as a buffer against impacts of storms and floods to which the Caribbean is especially vulnerable with the progression of climate change.

“By feeding our rivers, forests supply drinking water for nearly half of the world’s largest cities. They also provide shelter, jobs and security for forest-dependent populations,” added UNEP in the article titled Why do forests matter?

It is against this background that the UNEP has itself urged the “practice of planting and maintaining forested areas” towards, among other things, the elimination of emissions from deforestation and increasing carbon removals which help to fuel the warming of the planet.

“It’s clear that forests play an important role in climate action, which are all the efforts done to mitigate the frequency and intensity of extreme weather events, such as heat waves, droughts, floods and tropical cyclones, aggravating water management problems, reducing agricultural production and food security, increasing health risks, damaging critical infrastructure and interrupting the provision of basic services, such as water and sanitation, education, energy and transport,” the article noted.