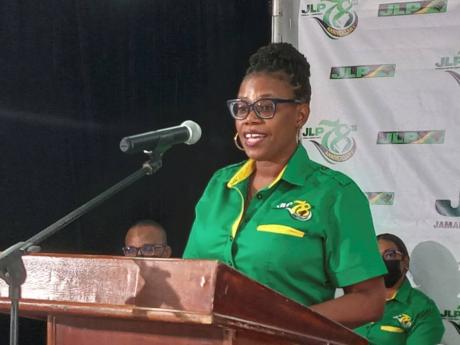 FIRST-TIME Member of Parliament (MP) for Hanover Western Tamika Davis has said the country needs more safe spaces in which to rescue and protect Jamaicans from the surge of gender-based violence.

Speaking at her party’s annual conference on Sunday, Davis said while the Andrew Holness-led Government has made several amendments to the Domestic Violence Act and the passage of the Sexual Harassment Act, the COVID-19 pandemic has provided another avenue for further levels of abuse.

“Safe spaces are needed, now more than ever, because of the current context of the COVID-19 pandemic. The curfews and stay-at-home measures caused us to be locked [at] home with, sometimes, our abuser,” Davis said

She argued that while much work has been done by the JLP-led administration, where Oliver Grange, who has portfolio responsibility for gender affairs issues, has been focusing on women’s rights, much more work is needed.

“We are concerned against violence against women. All of us in Parliament entirely stands against gender-based violence,” said Davis, as she addressed the JLP’s 78th annual conference from The James Hunter Event Centre on the Boardwalk Hopping Village in Negril, Westmoreland.

Davis, who is also an attorney-at-law, said the Government is also embracing men and boys in the fight against gender-based violence.

“This administration is determined to change that. As a result, we have engaged men in programmes of rehabilitation, and also our young boys via mentorship programmes.”

Further, she said the Government has answered the call from women who often said they have nowhere to go or anyone to call when seeking help from a life of domestic violence.

“It is for this reason that this Government has built the first-ever national shelter for victims of domestic violence,” MP Davis said. “Women now have a safe haven and can receive the necessary psychosocial support.”

Along with that, she lauded Grange for the implementation of a gender-based violence hotline, with trained specialists to guide victims through their issues.