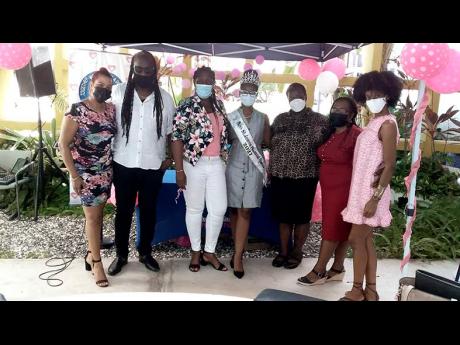 ONE HUNDRED and twenty women recently benefited from free breast cancer screenings through the efforts of the western Jamaica-based Janet Richards Foundation, in an initiative which was sponsored by the family of the late Gwendolyn Kameka, who died from the disease earlier this year.

Kameka, a resident of Mt Salem, St James, and a close associate of the foundation, sponsored the launch of the project beginning in 2020, in order to make mammograms available for women who were in need of screening, even while she herself was eventually hospitalised and battling the illness. The screenings took place at the Hospiten and Radiology West medical facilities in Montego Bay.

Richards, the founder of the Janet Richards Foundation, outlined how her group received funding for the project from Kameka’s husband and friends up to and after the thanksgiving service following Kameka’s passing.

“We all know about breast cancer and its effects, and Gwen wanted to make a difference in Jamaica. When she was in the hospital, as much as she knew what was going on [with her diagnosis], she was still thinking of how the mammogram testing could be financed,” Richards recounted.

“She died, unfortunately, and her husband called me after her thanksgiving service and said, ‘We still have a certain amount of money, and how many persons can it go for?’ and I told him it could do for 100 names. There were also some friends of Gwen to whom I said that, because of the cost, I could no longer do this project, and they said, ‘We are going to try and raise some funds,’ and within a week and a half they raised the funds,” Richards added.

Deon Murray, one of the 120 beneficiaries of the free mammograms, showered the Kameka family and the Janet Richards Foundation with gratitude for giving her and other women the chance to get the testing that they might not otherwise have been able to afford.

“In 2020, I was introduced to the Janet Richards Foundation, and I was told of the partnership with the Kameka family to sponsor mammograms for women who were not in a position to pay for the test. Miss Richards, her team, and the staff at the Hospiten hospital were very professional and warm on the day of my testing, and this year the test was done in a very friendly and professional environment at GWest (where Radiology West is located),” said Murray.

“I am glad God had this special partnership come about, and I pray He will continue to provide the resources needed to help women with their mammograms,” Murray added.

The contributions of the Kameka family and their associates in the fight against breast cancer complement similar efforts which have been made by local groups such as the Montego Bay Cancer Support Group, whose members also work on the provision of general educational material about cancer and free mammograms specificallt for females who are battling breast cancer.