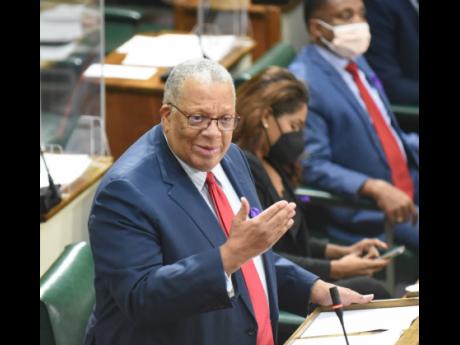 Kenyon Hemans/Photographer
Dr Peter Phillips, member of parliament for St Andrew East Central, making his contribution to the State of the Constituency Debate in Gordon House in Kingston during Tuesday’s parliamentary sitting.

Dr Peter Phillips on Tuesday called for an overhaul of Jamaica’s parliamentary system to move it away from the current dispensation of being a welfare channel for members of parliament to instead promote social and economic policies for the benefit of all its citizens.

Making his contribution to the Constituency Debate in the House, he said that political tribalism has resulted in Jamaica’s failure to achieve social and economic stability and sustainability, especially over the most recent decades.

“The truth is this failure of Jamaica to grow economically and to substantially improve or transform the quality of life of our citizens is a grave indictment on all of us and the political system, in particular,” said Phillips, the member of parliament for St Andrew East Central and a former leader of the Opposition.

“I believe that one of the explanations of this is that the tribalistic impulse of our politics has led us on either side of the political divide to blame the other side for all failings, to embrace all virtues from our side, and ... the system has not performed for the country as a whole,” he said.

The former finance minister lamented that parliamentarians on both sides of the political divide were guilty of consistently failing their constituents since Independence in 1962.

“If we are going to transform the experience of the last 58 years, then what we need to do is to enhance the role of Parliament in ensuring supervision of policy and accountability in the House because we are responsible for ensuring that good policies get made – policies that will protect the future, not only of this generation, but of future generations.”

However, he admitted that it has not been all doom and gloom as the country has managed to score some successes, such preserving its democracy while strengthening the rights of citizens. And although the rule of law has been battered at times, it has remained intact, he said.

The former People’s National Party president pointed to the fact that Jamaica has made its impact as a cultural powerhouse across the world, but was failing in other areas.

“In relation to economic growth and well-being; social transformation, including education, we have not excelled. Our peers in the Caribbean have surpassed us,” said Phillips. “One of the ironies is that in 1962, in withdrawing from the Federation, it was said that we didn’t want to be encumbered by the pauperised eastern Caribbean states, but the truth is, with the exception of two, all of them have per-capita incomes exceeding ours.”

He emphasised that parliamentarians played a critical part in national leadership and , as such, must be part of the solution going forward.

“There is no doubt that Parliament and political parties are losing stature, losing respect and the esteem of the people to a considerable degree. We just have to look at the declining levels in popular participation in elections and a lot of the national political events,” he said.