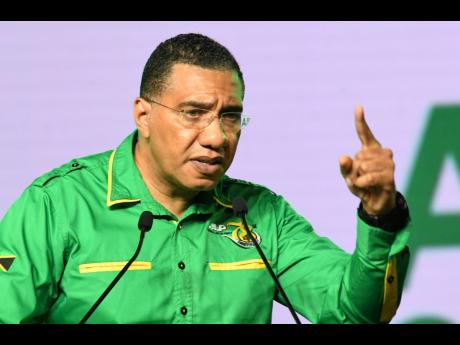 Andrew Holness, the prime minister, was perhaps a tad hyperbolic in declaring preference for the death penalty for people convicted for illegal possession of firearms. There is no question, however, about his intention to steer his Government towards draconian penalties for such crimes.

“Anyone found with a gun [that is illegal] should start with the death penalty,” Mr Holness told his Jamaica Labour Party’s (JLP) annual conference on Sunday. “That’s how strongly I feel about it ... that’s how serious we should treat it.”

Mr Holness’ sentiment, however, betrays two problems. One is an absence of history. The second, and more egregious, is the prime minister’s apparent conflation of laws and declarations with action and outcomes. In other words, establishing a punishment for a crime is not analogous to its enforcement, or of a court of law convicting an accused person and imposing a penalty for the crime.

We, of course, share Mr Holness’ frustration with Jamaica’s high, and under-reported, levels of crime and criminal violence, including the more than 1,300 murders that are committed on the island each year. Our homicide rate, heading towards 50 per 100,000, is among the world’s worst. Upwards of 70 per cent of the murders are committed with illegally acquired guns– a similar amount of people as are injured with firearms.

Jamaica’s problem with illegal guns is, to a significant degree, the result of the violent competition by gangs for turf and for the spoils of their criminal enterprises. Gangs’ acquisition of firearms is facilitated by the porousness of the island’s border and is exacerbated by the irresponsibility of the United States Congress in failing to pass sensible laws to control the sale of guns, supposedly because, as per the gun lobbyists, reasonable restraint would offend the Second Amendment right of Americans to bear arms. Lax laws and limited monitoring of America’s ports mean that many of these weapons do not stay inside the United States, but instead reach countries like Jamaica.

So, in conceiving strategies for disarming Jamaica’s criminals, Mr Holness hopes it were possible for the Government to “start at the highest level” of punishment for people convicted for gun-related crimes. Reduction of sentences for guilty pleas would not be automatic, although time off for giving up cronies and helping to find other illegal guns might be contemplated. In the circumstances, it will be interesting to see what amendments the administration brings to the Firearms Act, which the prime minister suggests is in the works.

Jamaica, however, has been here before.

In 1974, concerned with rising gun violence (there were 195 murders that year, for a homicide rate of around 10 per 100,000), Michael Manley’s administration introduced the Gun Court, convicts from which were housed at a facility at South Camp Road that was painted red. Popular lore is that Mr Manley declared the court and prison were red because “it is dread”. The critical elements of the Gun Court were that its cases, as they still are, were held in camera, and that conviction led to automatic life sentences (at the governor general’s pleasure) at hard labour, which might be reduced on the review recommendation of a quasi-judicial body.

In 1975, in Hinds versus the Queen, the Privy Council, Jamaica’s final court, struck down as unconstitutional the Magistrate’s Division of the Gun Court, where three magistrates (now called parish judges) sitting together would have been able to hear cases that were previously outside their remit. Lord Diplock, writing for the majority, argued that Parliament, by ordinary legislation (not a constitutional amendment), has vested “in a new court of the lower judiciary jurisdiction that forms a significant part of the unlimited civil and criminal or supervisory jurisdiction that is characteristic” of the entrenched Supreme Court, whose judges have greater levels of constitutional protection.

More relevant to Mr Holness’ remarks was Lord Diplock’s observation about the restraints on Parliament’s authority in setting “limits on the discretion is upon the judges” to apply sentences on persons convicted in their courts, with respect to a particular set of circumstances.

Said Lord Diplock: “What Parliament cannot do, consistently with the separation of powers, is to transfer from the judiciary to an executive body whose members are not appointed under Chapter VII of the Constitution (judges), a discretion to determine the severity of punishment to be inflicted upon a individual member of a class of offenders.”

The administration, therefore, has to tread carefully, lest it steps into a constitutional minefield of attempting to direct judges on how specific criminals ought to be sentenced, rather than establishing broad parameters for punishing a class of offenders. Indeed, this issue, and its infringement on the separation of powers, has figured in several recent cases in the Jamaican courts, including last year’s ruling in the Supreme Court on the constitutionality of the states of public emergency.

Further, Jamaica’s problem is not with laws or the severity thereof. Rather, it is with enforcement and prosecution. The island’s criminals generally behave with impunity because they know that they are unlikely to be caught, arrested, convicted and sent to prison. The police reported a “clear-up’’ rate of 49 per cent for homicides in 2020 (25 per cent in 2019). Even those ratios, some analysts contend, overstate the facts, given that many of the killings, and other crimes which may rightly be ascribed to gangs, never get attached to their specific perpetrator(s). Much of the clearing-up happens in broad sweeps. Relatively few people are arrested, taken to court and convicted.

Actual arrests and convictions are more likely to be deterrents to crime than Parliament approving harsher laws. Fixing this shortcomings should be a major, and urgent, focus of the police force.