More schools get go-ahead for face-to-face 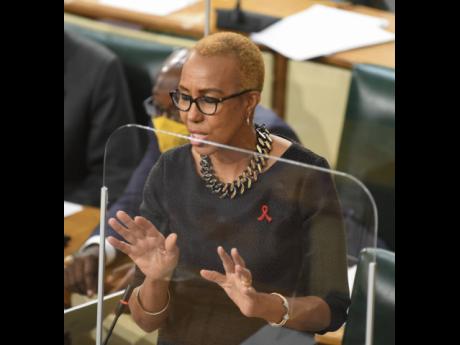 Kenyon Hemans/Photographer
Minister of Education Fayval Williams announcing in Parliament on Tuesday that more schools would be reopened to facilitate in-person learning.

Large primary schools have received the green light from Cabinet for a return to face-to-face learning while secondary schools that have achieved a 65 per cent vaccination rate of their student population will be allowed to reopen their doors.

A total of 383 primary schools have been approved for the next phase of in-person learning, accounting for approximately 164,651 students.

In a statement to the House of Representatives on Tuesday, Minister of Education, Youth and Information Fayval Williams said that the schools are required to use a blended or rotational schedule based on capacity or enrolment.

Starting November 8, the Government had given the go-ahead for students at basic and infant schools, 376 small primary schools, and grades 11 to 13 at the secondary level to attend school.

Williams reported that since face-to-face restarted, five students had contracted the virus, while two teachers were suspected to have been infected with the highly contagious disease.

In the first week of face-to-face learning, 248 of the approved 376 primary schools opened for in-person learning. These schools reported an average attendance of 33,158 of approximately 50,000 students, or 66 per cent, for the week ending November 12.

In the second week, 410 schools opened for face-to-face learning with an average attendance of 40,147, or approximately 80 per cent of students reporting for in-person learning.

Nine secondary schools have reported that they have either surpassed the 65 per cent vaccination target or will get there shortly.