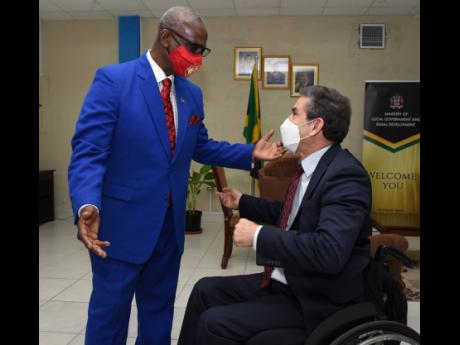 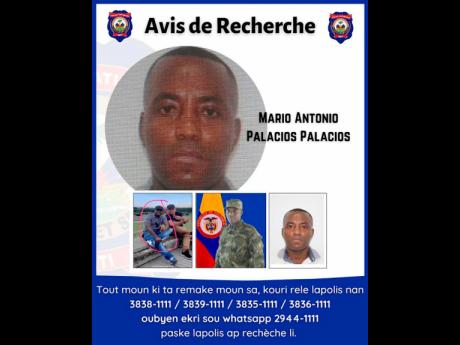 talks are still ongoing among Jamaica, Colombia and Haiti in relation to the transfer of Colombian fugitive Mario Palacios Palacios but it is unclear how soon the fate of the man fingered in the July 7 assassination of then Haitian President...

talks are still ongoing among Jamaica, Colombia and Haiti in relation to the transfer of Colombian fugitive Mario Palacios Palacios but it is unclear how soon the fate of the man fingered in the July 7 assassination of then Haitian President Jovenel Moïse will be determined.

Ambassador-designate of the Republic of Colombia to Jamaica, Jairo Raúl Clopatofsky Ghisays, said the South American nation was cooperating and providing relevant information to the authorities.

An Interpol Red Notice has been in effect for Palacios after the former Colombian military officer was accused of being part of a group of ex-commando mercenaries who murdered Moïse.

“As you know, this person (Palacios) now is with the Jamaican authorities and we are waiting. We are waiting on what the Jamaican authorities say about Colombia or Haiti, but all three we are working together,” Clopatofsky Ghisays told The Gleaner on Tuesday during a courtesy call and bilateral meeting with Desmond McKenzie, minister of local government and rural development.

Palacios has remained in local police custody more than a month after he was fined $8,000 or be forced to face five days in prison by a Corporate Area Parish Court judge on October 15, who also ordered his deportation for illegally entering the island.

After word of his capture in Jamaica made international headlines, Haiti’s foreign ministry dispatched a letter to Jamaica’s Foreign Minister Kamina Johnson Smith requesting that the Colombian be handed over to Haitian authorities.

“The Chancellery hereby formally reiterates its request to the Jamaican Commonwealth Government that Mr Palacios Palacios be transferred to Haiti and be made available to the Haitian judicial authorities leading the investigation,” read the October 28 letter, inter alia, referring to the probe into Moise’s assassination.

Jamaica does not have an extradition treaty with Haiti, and that may be among the issues complicating the handling of Palacios’ removal from Jamaica.

The Gleaner sought on Tuesday a response from Jamaica’s foreign ministry regarding the prospects of forging an extradition treaty with Haiti, Caribbean neighbours 100 miles north with which Jamaican criminals trade marijuana for illegal guns. However, up to press time, no response was forthcoming from the ministry.

The Sunday Gleaner had reported that the Haitian foreign ministry also wrote to the Colombian government urging its “cooperation” to ensure that Palacios is turned over to judicial authorities in Haiti.

Clopatofsky Ghisays told The Gleaner on Tuesday that his embassy here was vacant for some time and he wants to restore the relations.

One focal point of the bilateral talks was disaster reduction, a matter on which the ambassador said Colombia had much to share on experience and expertise.

“The most important part is how to give Jamaica our knowledge about our experience that we have in Colombia and the exchange of people that we are going to have,” he said.

McKenzie, too, was bullish about the prospect of cooperation, saying that the Colombians could help strengthen Jamaica’s Office of Disaster Preparedness and Emergency Management as the island sought to be a leader in emergency response.