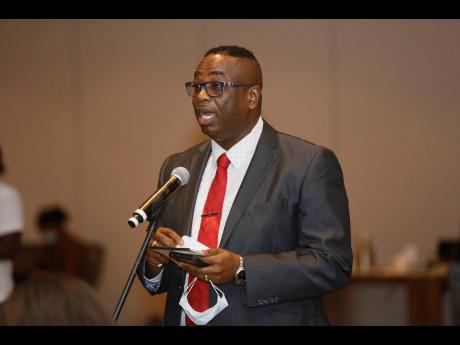 The Teachers’ Colleges of Jamaica (TCJ) is calling for the Government to withhold the salaries of teachers who are found to be operating without a licence, instead of seeking to criminalise them under the Jamaica Teaching Council (JTC) bill.

Dr Garth Anderson, dean of the TCJ, has emphasised that the colleges are prepared to support steps to professionalise the teaching profession.

However, Anderson thinks that the JTC bill, in its current form, could land teachers in legal hot water. According to him, the proposed legislation will require teachers found in breach to pay a minimum fine of $500,000, plus serve a stipulated six-month sentence in prison.

“We have concerns that the bill is seeking to criminalise teachers and the teaching profession because of that approach,” said Anderson.

“Equally, on the other hand, we do not see in this bill any incentives for teachers who keep abreast and align themselves with regulation. There are no incentives in the bill, what we see is punishment.”

The JTC’s bill is seeking to establish a governing body for the profession and institute a regime for the licensing and registration of all government-paid teachers.

The council, through this bill, will have the legal power to immediately suspend and cancel the registration of a teacher who has been charged with a disqualifiable offence, which would include sexual assault, murder, pornography, robbery, and fraud.

“We think that this, in a sense, is criminalising the profession, because the greatest punishment that any teacher could get, who is found without a licence is that, that teacher should not be paid for a period and the system must be so organised to capture any teacher who will be teaching without his or her licence,” said Anderson.

Anderson was speaking against the background of a promise by Prime Minister Andrew Holness that the Government will be spearheading a debate on the JTC bill in Parliament as part of measures to restore the image of the education sector.

“The Jamaica Teaching Council Bill will be brought to Parliament early next year. This bill will establish professional codes and standards for our teachers,” Holness stated during Sunday’s Jamaica Labour Party 78th annual conference.

According to Holness, the education sector has been bouncing the JTC bill around for more than 10 years to the detriment of the nation’s children.

Dr André Dyer, president of the Jamaica Independent Schools Association (JISA), said that while the bill has good intentions, it could nonetheless be a burden to some teachers.

“I will admit that there are persons in education that should not be in education. At the same time, we have persons who are fantastic educators but they can’t afford to further their own education,” said Dyer.