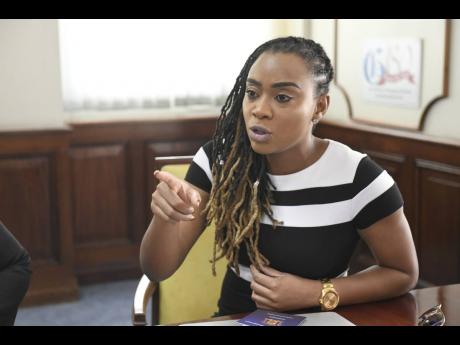 As Jamaica joins the world in commemorating International Day for the Elimination of Violence Against Women today, People’s National Party junior shadow spokesperson on gender, Krystal Tomlinson, is calling for lawmakers to reshape legislation to better protect women against domestic violence.

Sixteen days of activism under the theme ‘Orange the World: End Violence against Women Now!’, will seek to raise awareness and recall the need for a violence-free future.

Acknowledging existing statutory recourse to treat with domestic violence against women, Tomlinson charged that more must be done to protect victims locally.

The activist identified loopholes in these actions sharing that legislators should consider moving towards an evidence-based prosecution of domestic violence instances in light of the overwhelming number of cases that are dropped following initial hearings.

This, she said, is usually as a result of the emotional manipulation by the indicted abuser or the economic ramifications of taking the breadwinner to court.

“Any compelling evidence that shows that an abusive interaction has taken place should be enough to secure a conviction, even if the victim lies about it or refuses to participate further,” she said.

Tomlinson’s call mirrors a recommendation made by Prime Minister Andrew Holness earlier this year that legislation be passed that would give the State greater prosecutorial latitude even when a complainant fails to turn up or follow through on a report of violence.

Currently, one in every four Jamaican women has been a victim of gender-based violence, having been physically abused by a male partner, while an equal number of women have been sexually abused by men who are not their intimate partners.

Tomlinson believes that adopting an evidence-based system, which will force a ‘no-drop’ policy for domestic violence cases, will substantially reduce these numbers.

“It is a policy that has been successfully implemented in other jurisdictions. Currently, we see domestic violence as a ‘man-and-woman’ issue where, if the man and the woman say they are working on it, then we should stay out of their business. Until we begin to see it as a social issue, then the State will not treat it as its business,” she said.

Citing the social consequences of violence in the home, the activist listed concerns about the harming of children who try to intervene in conflict, the likelihood of fights ending in homicides, and increased tolerance for violence.

This approach, said Tomlinson, will also raise a sense of responsibility from the police to treat domestic violence cases with more urgency.

“By putting in place a no-drop policy, it elevates the sense of commitment, urgency, and professionalism required from the police to deal with it and it says to would-be and possible repeat abusers that they won’t get an opportunity to get away with it because there’s nothing they can whisper in the woman’s ear to cause the case to be dropped, as once there is evidence, they will not get away,” Tomlinson said.