Robotics a door-opener for youth 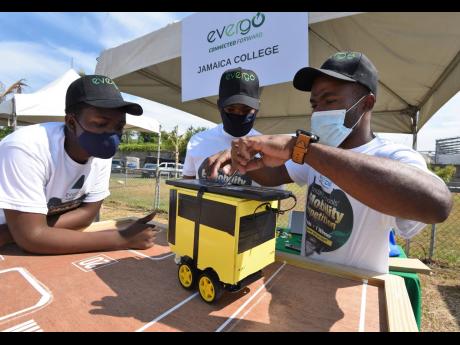 Guiding his protégés to success in the inaugural Evergo Jamaica Secondary Schools’ E-Mobility Robotics Competition on Wednesday has brought a sense of fulfilment to Jamaica College coach Paul Pounall.

“As a past robotics student, this is my way of giving back,” Pounall told The Gleaner, noting that he had been putting in hours after he finished his day job to work with the students and assist in their development.

A Jamaica College old boy himself, having graduated in 2012, he noted that he benefited greatly from being a member of the school’s Robotics Club.

“While I was there, it open a lot of doors for me. I was exposed to a lot as a result of it, and I said it is only fair that I give back to the boys so that they can be exposed to similar experiences that I was exposed to, if not even more,” said Pounall.

Despite having to change their initial design and completely reassemble their robot’s structure, his team managed to cop the $125,000 top prize even as they battled the time constraint.

“They didn’t lose hope and they believed in themselves,” a relieved Pounall said.

The contest was organised to highlight the exceptional abilities of students in the field, including at Immaculate Conception, York Castle, Pembroke Hall high schools, and many others.

It sought to challenge students to harvest and transform solar energy into kinetic energy while incorporating robotic principles such as programming, control, and design. The students were then given the task of putting together a robotic motor car with a mini solar panel attached to provide energy to move its motor and wheels, as well as the necessary technology to program and operate the robot.

Their skills were put to the test when they were required to program the robot’s operations to navigate an obstacle course they had not seen before and were awarded points based on the aesthetics and ergonomics, as well as the robot’s completeness and accuracy.

Science, Energy and Technology Minister Daryl Vaz noted that he is always heartened by initiatives such as this as it exposes young people to emerging technologies while enhancing their skills and competence levels.

With e-mobility being a significant part of the further modernisation of Jamaica’s energy sector through cleaner energy solutions and efficient vehicles, Vaz said that this technological advancement will do well for Jamaica in its efforts of combating challenges brought on by climate change.

He said that this has the most potential to reduce fossil-fuel dependency within the transport sector while promoting renewable energy source penetration within the national energy sector.

Pounall is encouraging other young people to pursue their interests in robotics.

“You may not benefit from it in the short term, but you never know, in the long term, there are definitely ways of gaining from it,” noting that his perseverance paid off in the end.

“It’s just a fulfilling feeling to know that you can give back to your school and evidently your country,” he added.

Evergo Jamaica is a large network of electric vehicle charging stations with locations throughout the Caribbean and Latin America. It is a member of Jamaica Energy Partners, a 26-year-old corporation that is Jamaica’s largest independent power producer.