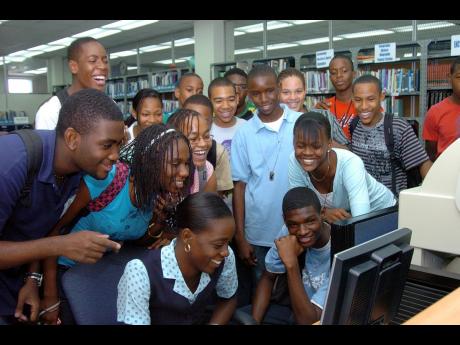 File
The Gleaner's Sheree Rhoden elicits interest and smiles from youngsters during a tour of the newspaper's library.

Buoyed by big second-quarter bottom-line improvements, Radio Jamaica Limited, which trades as RJRGLEANER Communications Group, is looking to capitalise on the one-two-three ranking of its divisions among media outlets on social media.

CEO Gary Allen is touting a growth philosophy of ‘digital first’ to capitalise on recent gains. He says the group’s current financial year is providing the basis for its “accelerated digital transformation” as it builds on a profitable out-turn for the 2020-21 financial year.

“When you look at the overall top three positions in social media among media entities in Jamaica, you see Television Jamaica at number one and at numbers two and three, you have The Gleaner and The STAR,” Allen said at an investor briefing hosted by the media group on Tuesday.

The RJRGLEANER Group is pressing ahead with a total digital transformation of its operations in all divisions and all facets of it operations, according to Allen. This, he said, will see the introduction of the digital switchover for television in 2022, along with the digitisation of operations and output in print and on radio.

In charting the way forward, the RJRGLEANER CEO said the ranking is evidence of the correctness of current capital expenditure. He says it allows the group to be ahead of the shifts in a changing media landscape.

“Radio Jamaica, Television Jamaica, and The Gleaner’s unmatched content quality and attractiveness will continue to dominate on all platforms wherever you are in the world, and we are about to monetise that, whether it is in the formats that you are accustomed to or in digital formats,” Allen said.

He said that the RJRGLEANER Group is already proving to be a more attractive option for consumers of media content and advertisers.

After posting a five-year high of $171 million in profit for the March 2021 financial year, the RJRGLEANER Group is now reporting second-quarter profits of $27 million, a reversal of the $67.97-million loss for the similar July-September period in 2020.

RJRGLEANER’s six-month revenues stood at $2.86 billion, which was 24 per cent more than the $2.3 billion for the similar period in 2020. She said the audiovisual, audio, and print segments all showed revenue increases during the period.

Allen said the six-month performance is evidence that the communications group is headed in the right direction as it expands and capitalises on growth opportunities.

Speaking after the information session, Allen reiterated the words of Chairman Joseph M. Matalon that the RJRGLEANER Group was weighing its options in approaching the market. Allen is confirming that the group is close to a decision, but said he could not be more definitive on the likely direction at this time.

The RJRGLEANER Group is already in capex mode, according to Messam. She says the $366-million, or 16 per cent, increase in non-current assets was mostly attributable to accelerated capital purchases, particularly as it relates to digital programmes.