Blanket gag on watchdog has no merit, says Panton 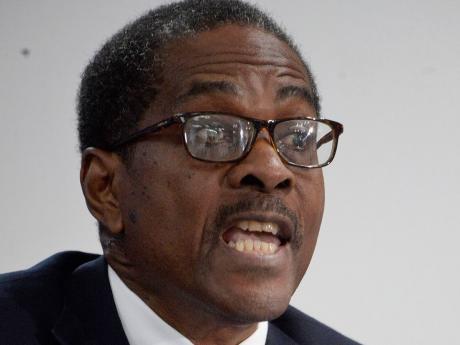 Legal luminary and former president of the Court of Appeal, Justice Seymour Panton, has shredded arguments by legislators who crafted a gag provision in law to restrict the Integrity Commission, Jamaica’s single anti-corruption body from announcing investigations and commenting on them until a report is tabled in Parliament.

With the Integrity Commission being the only law-enforcement body under the imposition of a gag barring it from announcing or commenting on investigations, questions have risen about whether lawmakers have erected this barrier to shield themselves from public scrutiny.

“Unlike the Integrity Commission, law-enforcement agencies in Jamaica and in other countries do have the discretionary power to make public announcements about their investigations. They are not gagged. This suggests that blanket statutory gags are unusual and do raise curious questions,” Panton opined.

Making a compelling case for legislators to unmuzzle the corruption watchdog, Panton, who is the current chairman of the Integrity Commission, said he was not aware of any similar gag that has been imposed on any other law-enforcement agency in Jamaica.

Panton said the “Integrity Commission, therefore, believes that the ‘gag’ should be cause for significant public alarm and concern”.

With the Integrity Commission being a law enforcement agency, the announcement of an investigation by the anti-corruption watchdog does not, by that very fact, undermine the presumption of innocence, Panton reasoned.

Further, the commission argued that the announcement of an investigation by its officers into an allegation cannot logically undermine the presumption of innocence, or tarnish someone’s reputation, when the disclosure follows an allegation that has already been introduced in the public domain by a third party.

“The Integrity Commission does not make allegations against persons or entities, nor does it tarnish or impugn their reputations,” Panton said.

He argued that as a quasi-judicial body, the commission seeks to unearth or to determine the veracity of the inferences or allegations of misconduct that have already been made by third parties against public officials.

With Jamaica perceived to be highly corrupt, Panton said that the gag only served to further undermine public confidence and trust in the country’s institutions and leaders.

At a previous sitting of a parliamentary oversight committee, executive director of the Integrity Commission, Greg Christie, said that the Serious Fraud Office in the United Kingdom made announcements whenever it commenced an investigation.

Based on Transparency International’s corruption perception index for 2020, Jamaica was ranked as the fifth most corrupt state in the Caribbean ahead of Guyana, Trinidad and Tobago, Dominican Republic, and Haiti.

“Corruption loathes transparency. It thrives in the dark. The gag, because it suppresses information, is, therefore, self-defeating,” Panton declared.

The commission revealed that a matrix of 21 major investigations initiated by the now-defunct Office of the Contractor General (OCG) for the four-year period preceding February 2011 uncovers “a glaring double standard” on claims made by some about damage done to reputation of persons owing to announcements by the then contractor general.

Panton said that the matrix highlights that it was parliamentarians and politicians themselves, and not the OCG, that had made the initial public allegations which later prompted eight of the investigations and the subsequent announcements.

The anti-corruption body also points out that in eight of the remaining 13 instances, the allegations that led to the OCG’s probes were claims that were first publicly made in the print and electronic media by third parties.

Panton also questioned: “What good purpose is served by hiding the fact that the Integrity Commission has commenced an investigation into said allegation”?

The commission again called on the Parliament of Jamaica to repeal Section 53(3) of the law, giving the leadership of the commission the discretionary authority to make statements about its investigations as it sees fit.

Members of the parliamentary oversight committee are expected to respond to Panton’s arguments at the next sitting of the committee in January.