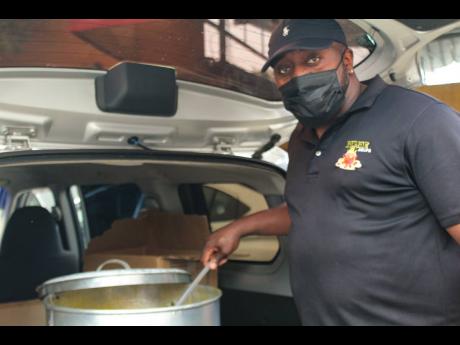 Stephanie Lyew
Bulbie supplies the Corporate Area with his soup of the day from the back of his station wagon. 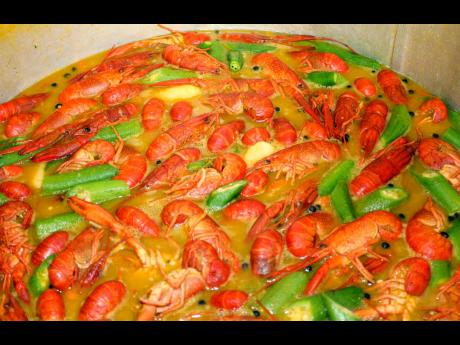 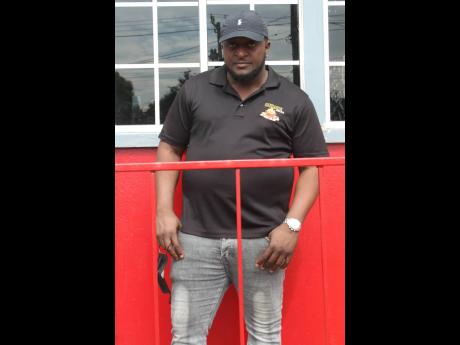 Stephanie Lyew
Nicardo Sayers, known widely as ‘Bulbie’, wants to make a franchise out of his soups. 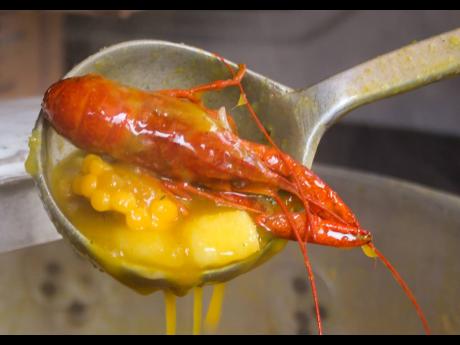 Stephanie Lyew
Mondays are dedicated to crayfish, a good source of protein.
1
2
3
4

Two weeks ago, at the beginning of the new workweek, I found myself craving a cup of crayfish soup. Naturally, I looked up a name that has been on the tongues of Kingstonians – Bulbie – and as luck would have it, crayfish was the Monday soup special.

It was already midday when I dialled the number on social media to say that I was on my way to get my fill. By that time, the pot was already half-empty, and in a matter of minutes, my luck had changed, and not for the better.

“Soup sell off!” exclaimed Bulbie over the phone. “Me think you woulda reach earlier, only a likkle scraping inna di pot. I may have to make another batch.”

Lunchtime had just started, so how could a party-size amount of soup disappear so quickly? After all, soup isn’t a breakfast dish. Oh, but Bulbie’s Soups are, said the taxi man who was taking me to Central Plaza, where the celebrated soupmaker spoons his creations boiled in a large aluminium pot from the trunk of a station wagon.

Bulbie later explained that orders come in early, and he has to make sure those are filled.

“On a Monday, as soon as the clock hits 10 o’clock, people start sending in orders, and sometimes I am supplying the whole of Kingston. The earlier you order, the better,” he told Food.

“It’s six days, six different soup and crayfish starts off the week,” Bulbie added. The red peas pig’s tail and pumpkin chicken soups get a lot of attention too, but it is the crayfish soup ($200, $350 and $650 for a small, medium and large, respectively) that has people dreaming of the taste, including me, and I waited a whole week to satisfy the craving.

The boil, a mixture of pumpkin, fresh herbs, and seasonings will do more than warm up a person’s bones. Especially as Bulbie adds the ‘holy trinity’ of mixed vegetables, spinach and okra that is rich in collagen – the substance responsible for holding the bones, joints, muscles, skin and tendons together in the human body. The demand for crayfish is high, so, sometimes he mixes crayfish with conch on a Friday.

“Crayfish, janga or river swims has a wide range of nutrients and vitamins – rich with omega-3 fatty acids and protein. It is another one of those stamina soups. It builds the nerves and the joints – is durability for man and relaxes the women, keep them fit,” Bulbie said.

Generous chunks of potato, sweet corn, dasheen and dumplings make this an idyllic meal for any day that’s just go, go and go.

Bulbie, whose real name is Nicardo Sayers, used to be a dancer and bus driver. For the past three years, he has invested in his soup business which now caters for many large popular events. When he is not putting together potages created with nutritious foods, Bulbie gives a helping hand at his mother’s restaurant located at Superior Honda on Hagley Park Road, where the nourishing golden pumpkin broth starts bubbling from about 9 a.m. By 11:30 a.m., it is ready, and he is out the door on his way to Central Plaza. Want to secure a cup of soup early, don’t wait until Bulbie hits the streets, head to the source. “This is where you can find me; the minute soup finish, I start prepping for the next day, or I help my mom in the kitchen,” he said.

“Me go extraordinary with soup. Nuff people I meet that say them nuh eat soup, after them have a cup of mine, them get converted. I thank my mom for that; she taught me how to cook and make soup by combining certain flavourings and using different methods,” Bulbie continued.