Mark Wignall | Murders? We roll with the punches 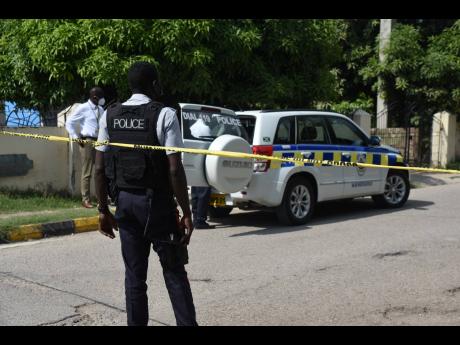 Ian Allen
Members of the Jamaica Constabulary Force at the scene of a double murder in Spring Village, St Catherine.

Just two days before, a double hit job had snuffed out the lives of two men. In the little joint about a hundred metres away from where blood was spilled, the place was packed with men talking about everything else but murder. “Tings a tun up fi...

Just two days before, a double hit job had snuffed out the lives of two men. In the little joint about a hundred metres away from where blood was spilled, the place was packed with men talking about everything else but murder.

“Tings a tun up fi mi. Me is a landscaper and mi have nuff job line up fi di Christmas.” As the man described his job to the new bartender he wanted all who listened to know that we should know that ‘landscaper’ was definitely a leap in quality above a mere man who cut lawns for a living. “A pure big man pon di hills me work fah.”

I tried to lure an auto mechanic who seemed to be in his 40s into a general discussion about murders across the island, and especially the daring daylight hit of two days before. He would have never of it. “Dem do whey dem haffi do. Wi nuh inna fi dem business. My woman and pickney dem expect me fi forward wid money and tings fi Christmas. Dat a my business.”

It has been an unwritten but collective thesis put forward by uptown people and those who do not live in any of the dense, crime-infested inner-city pockets that once the general population is collectively angered enough the voices will become louder and the protests will hit the streets.

That thesis doesn’t seem to the panning out. What it appears is happening is that a significant majority of our people have resigned themselves to what they see as a hard reality cast in stone that murders in Jamaica is just another cultural feature of this country. Like soup on Saturdays, stew peas on Wednesdays, loud dancehall music everywhere and a $1,800 oxtail lunch that few can afford.

Much of the nonchalance on murders stem from community information that many instances of murders in Jamaica reside around gangs warring over scamming or extortion turfs. The way the people see it, ‘is dog heart bredrin a kill dog heart bredrin.’

When it spills over into the wider community it is at that point that innocent lives can be taken as relatives and friends and those known to have any connections to a gang target or, even worse, the community become themselves targets and victims.

While repeatedly watching the video clip of the double murder which recently took place at the gas station near to Molynes/Perkins Boulevard intersection, it occurred to me that the murderer was in no hurry to exit the scene after the daring daylight hit. Which could mean that the same planning that was put into the timing of the murder car and the car of the victims was also utilised in ensuring a safe exit.

And as far as the killer and his cronies were concerned, it came across again as if they were daring the police to stop them from operating with impunity within the borders of an SOE.

As I have pointed out in a previous column, the police force of 2021 is quite different to the Jamaica Constabulary Force (JCF) of 1976. Back in the day there were policemen who were openly either pro People’s National Party (PNP) or pro Jamaica Labour Party (JLP). Plus the government of the day was often the grand puppeteer pulling the commissioner of police to and fro.

And it is safe to say that the typical policeman of 2021 is academically brighter that those of the 1970s and 1980s. While the police federation has begun to ‘chaw fire’ over agreements struck over back pay for overtime work there are some in the political arena who still believe that there is enough political admiration going for Andrew Holness. Those individuals believe that that charm offensive will work every time.

I would not back on that. While I have not seen any poll numbers to indicate that the JLP government is slipping in popularity, I believe that a constant stream of scandals, although not thought to be a game changer in politics in Jamaica, can have a wearing-down effect on the electorate.

Good news about the return of a growth path in key sections of the economy have sent a message to the JCF that some of that will soon be added to bolstering the tax receipts. The JCF wants to be considered first in line at the new negotiating table. That, of course, is nothing new.

Some of those who have been raising hymns to Holness since his bludgeoning of the PNP in September of 2020 are invested in the hope that the PNP is psychologically caught up in a web of division and factionalism. They are hoping that from now to the next scandal the PNP will be walking on cracked stilts.

The restive members of the JCF know that reduction of violent crime is very high on the totem pole of important items to be dealt with in this country. What better time to make some noise when stressors within some of the states of emergencies (SOE) are showing up.

That our people have reached the stage where they do not expect any significant lessening of activity in the killing fields tells me that that long desired common action between the police and the citizenry will never happen.

That will, of course, come face to face with the reality that communities deep within some of these SOEs view the police and soldiers as godsend.

“Something di youth dem come out a di lane mout and pop off dem machine like a boast dem a boast,” said a 56-year-old shopkeeper in a community inside an SOE in St Andrew. “From di security move in dem get quiet.”

Overall, however, many people at street level tend to talk broadly and dismiss any idea that the murder rates will ever go down. Philosophically, holding such views for so long cannot be healthy for this country. People need something grand but achievable and it must start as a dream and then grow to a burst of hope for the future.

If we don’t have that and can find no accommodation for it in either the short or long term, what does that say about how we collectively mend bits and pieces towards achieving that better part of ourselves that, for now, remain buried. It is there not as hope, and worse, a destination that is constantly receding.

Mark Wignall is a political and public affairs analyst. Email feedback to columns@gleanerjm.com and mawigsr@gmail.com.