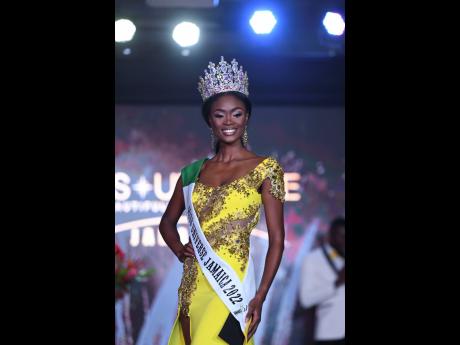 New Orleans will be the site of the international beauty pageant, bringing together nearly 90 contestants from around the world in January, the Miss Universe Organization said.

For local organisers, who last year had just about a month to prepare the 2021 representative Daena Soares to head to Eilat, Israel, the excitement is palpable.

“We can now [look] at encouraging Jamaicans to come out and support her. She’ll be competing in this hemisphere, which is great. She’s going to be competing in a city not too far away from home, so it should be easy for most Jamaicans to come out and support her,” said Mark McDermoth, co-national director of the Miss Universe Jamaica franchise, adding that the host city is a great option logistically.

“We can now really go to town with the costume and make it as big and dramatic as ever, because we don’t have to be transporting it to the other side of the world. That is good news for us, too,” said McDermoth. While not revealing what the costume would be, he gave some insight into the prospects. “We have a very exciting proposal for the costumes. We are going to some entities that are the masters in this.”

McDermoth said Calvin’s training had begun far in advance of the coronation. “We have been training all the delegates in the competition from day one for the Miss Universe competition. We weren’t training just for the local leg. Everything we were imparting to the ladies was based on their competition at Miss Universe.”

The local organisers will now focus on fine-tuning. “Now the follow-up training is going to be focused on one person now, and we’re going to follow-up on all the other things – the interview technique, the speech and public speaking technique, the voice, projection, being that boss lady when you enter a room, and how you command attention. How do you score points with the judges in the interview, how do you present your best self during the stage presentation, and all of that,” said McDermoth. The time will also be used to tie down Calvin’s wardrobe, hair, styling and make-up. “We are in full gear now with all of those,” said McDermoth.

In a release on Monday announcing the host city and date for the coronation, New Orleans Mayor LaToya Cantrell hailed the Miss Universe Organization.

“The city of New Orleans and the Miss Universe Organization share common values of celebrating inclusion, culture and the empowerment of women,” said Cantrell.

She noted that former contestants and winners have gone on to become surgeons, diplomats, politicians and business leaders, adding that “they all champion social causes that are important to them”.

The competition will be aired on January 14, 2023 – a Saturday – at the city’s convention centre, according to a news release. The live broadcast will culminate with the 70th Miss Universe – Bollywood actress Harnaaz Sandhu of India – crowning the winner.

“There is no place like New Orleans. This vibrant city has been at the top of our list to host for quite some time due to its rich cultural history, as well as its unique arts, entertainment, and culinary scene,” said Paula Shugart, president of the Miss Universe Organization.

Last year’s pageant in Eilat, Israel, was held in the middle of the night to accommodate the US primetime TV schedule.