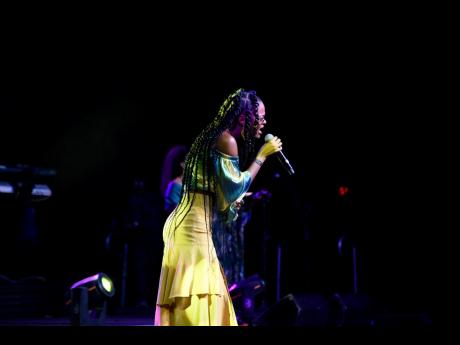 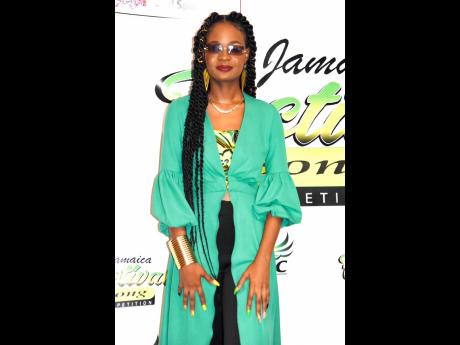 History was again created inside the National Indoor Sports Centre last week Thursday night when 22-year-old emerging singer, Sacaj, walked away with the Festival Song title, triumphing in a field that saw her as the only female finalist.

Her original entry is titled Nuh Wey Nice Like Yard.

Danece Alia Jacas, better known as Sacaj, grew up in St Mary singing in the church, where she has been active in music ministry since the age of six. She says that her musical taste ranges from reggae to neo-soul to pop and R&B, and this influence can be heard in songs such as Mary Jane, a not-so-subtle ode to the weed, and First Real Love, a cover version of D Wisdom’s 1991 ballad.

Sacaj compares her own style to that of artistes such as H.E.R. and Jhené Aiko.

“I was always singing and writing, but did not really want to do it as a career. I also know that the office thing is not for me. A producer friend, who knew I could sing, reached out to me in 2019 and I recorded my first single, Mary Jane, for him,” Sacaj shared.

That heralded her new journey, and, armed with a manager who is a long-time family friend, the former student of the University of Technology is ready to spread her wings. Sacaj is grateful for the exposure she has received through the Festival Song Competition platform, and she is only too aware of all the winners whose careers have catapulted since appearing on that highly respected stage.

“Lots of thanks and appreciation to the organisers, JCDC, and also to the other competitors who made this competition so great. Can you believe that I now know everybody’s songs word for word? This is a moment [that] I will always treasure,” Sacaj said.

Her current release is a collab with veteran artiste, Louie Culture, titled One More Day.

1. How does it feel to be the Festival Song Competition winner in the year of Jamaica 60, and being the fifth female winner in the contest’s 56-year history?

It’s a very, very, very overwhelming feeling to know that I am not only a Festival Song winner, but you know, I am the Festival Song winner for this very, very special year for Jamaica, our diamond jubilee. It’s a wonderful feeling and it still hasn’t fully sunk in yet. So that’s history, plus I’m the fifth female to ever win the contest. Five is also a special number. So, I’m just very grateful and very humbled to be making history in those ways.

2. What has your journey been like so far, especially as a woman in the business?

Thankfully, because of the protection of my team, I have not yet – hopefully it remains that way – experienced some of the horrors that I’ve heard some of the females before me say that they had to go through in this business. But, you know, I’m still very young, so I am just proceeding with caution and trying my best to survive in this still very male-dominated industry.

3. What is the reaction to Sacaj when she steps into musical spaces?

I can say that I am … underestimated. Sometimes when people see me walk into spaces, especially because of the type of music I do, they easily pretend that I’m not there. My stats show that it’s mostly men who listen to my music. So, especially because of that, when I step into a certain space and I’m the only female, people look at me like … you know … weh dis yah girl yah ah do yah? Not expecting what I deliver when I deliver it.

4. What are your plans musically?

To continue to put out good music and continue to make the most of the platform that I’ve been given now. I plan on releasing at least one song every month for the remainder of this year.

5. Which woman in the business do you dream of collaborating with?

My dream collaboration as of right now, a dream reggae collaboration I have, is with the great Marcia Griffiths. I absolutely adore her music. So, hopefully one day in the near future we could collaborate.