Sevana vibrating on a ‘Good’ frequency 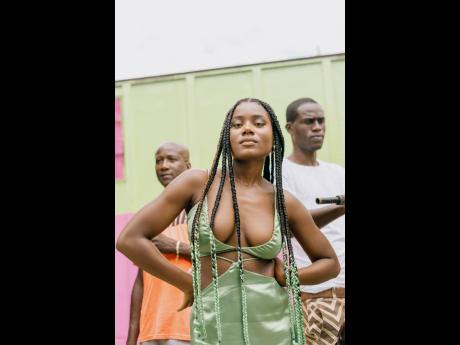 Jayson Tucker
Sevana on set of her ‘Lowe Mi’ music video. In the background​ are her uncle Andrew Beckford (left) and brother Davin Blake.

Be it with a full band, solo guitarist or even a cappella, Sevana has a way of captivating and engaging audiences before she even sings a word. From her eclectic, sometimes pastel, but always edgy ensemble, to her otherworldly vocals and occasional...

Be it with a full band, solo guitarist or even a cappella, Sevana has a way of captivating and engaging audiences before she even sings a word. From her eclectic, sometimes pastel, but always edgy ensemble, to her otherworldly vocals and occasional dance breaks, there’s always something to look forward to when she graces a stage. Her home on Saturday will be the Jamaica Rum Festival stage for which she has something exciting planned, though she was a bit tight-lipped speaking to The Gleaner.

“Let’s just say that this will be the beginning of me realising my vision of my ultimate performance,” she said.

Sevana is no stranger to the ‘RumFest’ stage, having performed at the inaugural staging in 2019 and the last in-person staging in 2020. At the time, she was part of Protoje’s In.Digg.Nation clique and ensued a 1000-plus female choir with her infectious tune Nobody Man (which she flavoured with Vanessa Bling’s One Man). Having amicably split recently from the music collective, Sevana returns with her own individual set.

“It’s really exciting! I’m honoured to be welcomed again by RumFest. Cyah wait!” It’s an overall exciting time for the singer whose second release for 2022, Lowe Mi, has been shown love by the who’s who of the music industry and fans alike. The Pantha-produced single captures a Sevana who is steering clear of all that is bad and draining, and instead blossoming in spaces and places where goodness prevails - a peace of mind amplified by being a staple on her nana’s prayer line.

“I’m so, so, so grateful and thankful and in awe, honestly,” she said. “This response to Lowe Mi is confirmation that I’m where I’m supposed to be.”

The track is treated with visuals which see her returning home to Westmoreland, her great grandaunt’s house in Williamsfield to be exact. “The whole idea of Lowe Mi is to be in safe spaces with the people who are ready to love on you as a way to barring all negative energy,” she shared.” It’s about pursuing goodness always. So, the video being shot in Westmoreland, particularly at Aunty Amy’s house, is a necessary part of telling the story because I have always felt at peace there. So grateful to the director Jordan Mars for bringing my vision to life.”

She teased that Lowe Mi, as well as her prior release, Brand New, might appear on her forthcoming debut album. She also hopes to release the album on her very own record label, GoodHzMusic. The vision for the label, she explained, is documented in its name.

“The ‘Hz’ you see stands for frequency. I want to represent the kind of music that feels good and does good.”

On that note, she said fans can look out for “a really dope collab” soon, and in her spirit of gratitude didn’t miss the opportunity to “thank everyone who believes in me and is rooting for me”.

Sevana’s debut body of work, Be Somebody (EP), was released in 2020 with songs including Mango, Phone a Friend and If You Only Knew.