Review: ‘The King’s Man’ goes back to basics 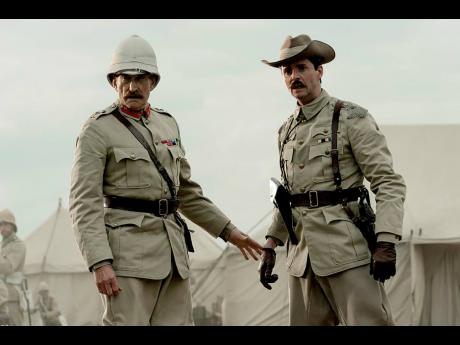 Contributed
Charles Dance (left), and Matthew Goode in a scene from ‘The King’s Man’.

Many threequels act as legacy films. Look no further than Spider-Man: No Way Home, which stands as the ultimate look back at over a decade of films. While not the case for Now Way Home, referencing a franchise’s history can often bog down a film and keep it from telling a satisfying story. It’s interesting then that The King’s Man opts to go in a different direction, telling an entirely new story with hardly any references to characters you know and love.

The King’s Man has a lot of ground to cover. The origin of the secret organisation is revealed to be found in the chaos of the First World War. For a series known for outlandish gadgetry, this film has fun with elements that are now considered quaint. One of the film’s most tense sequences, the first-ever launch of a parachute, goes about as successfully as you might expect.

By taking things back to the past, the movie avoids the trap of incredulity. After the last film managed to cure a bullet to the face, this film is refreshingly restrictive in what its characters can do, making the danger they get into all the more interesting.

Despite their limitations, the film does have the signature outlandish action you would expect from a King’s Man movie. The combat in the film is riveting, with Ralph Fiennes and Djimon Hounsou kicking and punching their way through enemies large and small. The fighting feels scrappy, with the characters trying their hardest to survive with whatever they can get their hands on.

The movie’s outlandish nature also extends to its huge cast and visuals. The visuals makes the film very pretty to look at, even in the uglier environments with soldiers down in the trenches. The large cast is less enjoyable, as the global conflict features several actors as nothing short of caricatures. While I appreciate an over-the-top moustache twirler as much as the next critic, The King’s Man suffers from having one too many.

The film’s main story gets distractingly convoluted, with the characters getting lost in the mix. It’s not impossible to follow, and thankfully, the relationship between the main character and his son is strong enough to give the film a focusing centre. Ultimately, The King’s Man has a lot of fun scenes that don’t necessarily come together very well, but still provide a good time.

Damian Levy is a film critic and podcaster for Damian Michael Movies.