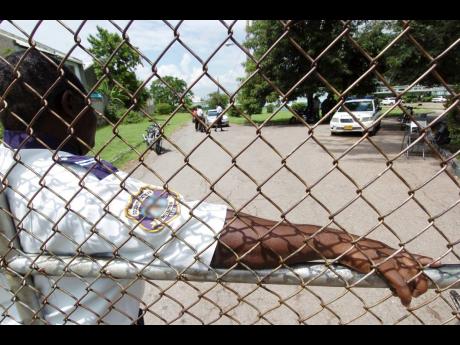 File
In this file photo, a security guard is seen standing at the entrance of Calabar High School.

The government is acting with good sense by not only insisting that private security companies fulfil their legal obligations to their workers, but in agreeing to renegotiate security contracts so that the firms can meet the requirements of the law.

However, this development, arising from last September’s ruling by Justice David Batts that security guards employed by Marksman Limited were proper employees, rather than independent contractors, demands a broader, and deeper review than the action by the finance minister, Nigel Clarke. The labour ministry, which has an interest in protecting workers’ rights, should be taking a deep dive into the question of the use of independent contractors across the economy.

At the same time, as this newspaper has noted previously, the private security industry, in the face of the new realities, might have to consider its rationalisation. Mergers and acquisitions might be inevitable.

For a long time, the security companies ostensibly made their guards independent contractors, although their conditions of employment, in almost all respects, mirrored those of full-time employees.

As Justice Batts said in the Marksman case, “The security guards are not in business on their own.”

“ [T]hey work for Marksman and are a part of its organisation,” he wrote. “ Marksman has the right to exercise direct control over the work done by the security guards.”

The independent contractor categorisation allowed the security companies to either not make statutory deductions, such as for the National Housing Trust (NHT), or make the deductions without paying the companies’ matching contributions, which has to be done with respect to regular employees. Nor were ‘contractors’ entitled to overtime pay after a 40-hour workweek, or other normal employment benefits.

The issue was put into the spotlight when the NHT sued Marksman for J$478 million in contributions, which the company failed to pay on behalf of 3,000 employees for the years 2000 to 2016.

In the aftermath of the case, security companies floated the idea of increasing the workweek from 40 to 60 hours, and warned that the court ruling would mean an increase in the cost of their security services by up to 50 per cent. It could also mean significant job losses in the sector, which has approximately 23,000 registered private security guards.

Last week, however, Minister Clarke announced that the guards of any security company providing services to the government will, from April 1, be recognised as employees, rather than contractors. The central government and its various agencies and departments have over 500 security contracts, costing taxpayers billions annually.

The government’s stance means that the companies will have to make all obligatory statutory deductions and pay overtime, in accordance with the law.

“A breach of these terms with respect to any security guard working at any ministry, department or agency would be grounds for the termination of that contract,” Dr Clarke said.

The government, according to the minister, has set aside “a few billion dollars” to bump up its current security contracts. The firms appear happy with the direction in which the government is headed, as they seek to settle the terms of the revised agreements.

However, their industry association appears not to be sanguine of the attitude of the private sector, thus far.

George Overton, president of the Jamaica Society for Industrial Security, warned last week that the companies cannot “afford to subsidise anybody”. So if private businesses can’t pay higher costs “there will be a termination of services”.

We agree that security companies are in business; they are not providers of social welfare. And certainly not to ventures whose aim is to make profit.

However, in market economies, when the business environment changes, sectors have to reset themselves, if they are not to collapse entirely. In those circumstances it is the innovative and nimble who survive.

Perhaps such a situation now confronts Jamaica’s private security sector in which 178 companies in good standing are registered with the industry’s regulator, the Private Security Regulation Authority.

On the broader implication of Justice Batts’ ruling, it is well known that the independent contractor is widely used in Jamaica to give workers a tenuous hold on their jobs and benefits therefrom. Politicians periodically speak of the issue and threaten to address the matter, via legislation. Little has happened.

The time is propitious for Labour Minister Karl Samuda to open a serious stakeholders consultation on the issue.