Garth Rattray | Some questions for the Ministry of Health 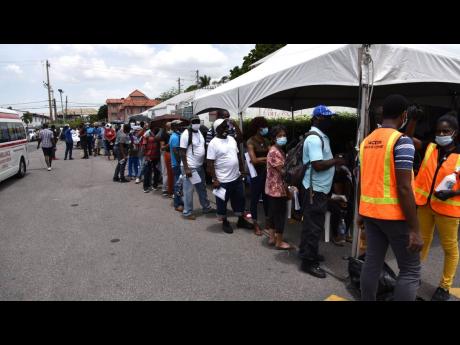 Contributed
People waiting to receive the coronavirus vaccine at the Ministry of Health and Wellness’s mobile vaccination drive at Sovereign Centre in St Andrew.

The Ministry of Health and Wellness (MOHW) is a very hard-working institution that has improved the health and saved the lives of our citizens. This is especially true during this worldwide COVID-19 plague. Despite the decisions made by politicians, the MOHW has not failed in its commitment to serve us well. However, there are several troubling matters for which I have no answers, and for which I have absolutely no idea how to get answers from the MOHW, save by making this public plea for a response.

My first question therefore is, why is it that most doctors, especially those of us practising medicine privately, have no direct line of communication with the decision-makers and dispensers of information within the MOHW? This is extremely important for the delivery of good healthcare to our citizens. To communicate high up, most of us have to know someone who knows someone within the MOHW. That is untenable, especially in this age of rapid and easy communication.

My second question is one that has been distressing many doctors for years, and one for which the MOHW has not offered a reasonable explanation. We, the group of doctors who see more patients than the public healthcare facilities, are often first made aware of the presence of potentially dangerous infectious diseases and epidemics (like dengue, for example) by way of mainstream media. Why is this so? We, the frontline healthcare personnel, ought to be made aware of the advent of diseases as soon as the MOHW is aware of them.

My third question is this, why is it that our ideas and suggestions often fall on deaf ears and are totally ignored? For example – the best way to avoid getting this airborne virus is by adhering to the protocol of wearing face masks consistently, distancing and sanitising when out in the public and in the company of others. But the vast majority of Jamaicans were not, and are not observing the protocol. The repeated suggestion of volunteer COVID-19 marshals, who remind and encourage citizens to adhere to the protocols and report the places that pose an outright danger for the spreading of the virus, has consistently been ignored, to the detriment of everyone. Why?

I agree that vaccination goes a far way in significantly reducing hospitalisations, serious illness, saving lives and freeing up the healthcare system to treat citizens with other medical problems. However, vaccinations are not that good at preventing infection and transmission of COVID-19, so anti-COVID-19 protocols must be adhered to in order to defeat this monster. But the MOHW has never responded to, or even attempted to try volunteer COVID-19 marshals for the general public.

My fourth question is very concerning to me personally. A 70-year-old, hypertensive, male patient of mine received both his Pfizer vaccines while in the United States. His wife was also vaccinated. They both returned to Jamaica but, with the advent of boosters, and the availability of that vaccine here, they both sought to ascertain their immune status before getting boosters. It turns out that although his wife’s antibody test showed that she mounted a protective immune response, his test yielded a negative response. He needed to get a Pfizer booster.

Because everyone is told to get a letter from their doctor if they need a booster, I wrote a letter to the vaccination centre stating his date of birth, that he is hypertensive, the dates that he received two Pfizer vaccines in the United States, and the fact that his antibody test was negative – meaning that he was unprotected and needed a booster. I also enclosed a copy of the negative antibody test. The vaccination centre turned him away. They told him that my letter was not strong enough!

The patient turned to a consultant at the UHWI who wrote a letter with the very same information, without the supporting antibody test evidence. That letter was readily accepted, and he got his essential booster vaccine. If that elderly, male, hypertensive and unprotected patient did not know a UHWI consultant, he would be left very vulnerable to COVID-19 infection and risk sickness, and even death! My simple question is, why was my letter not accepted? It is important for me to know this for future instances. Since my letter had all the relevant information and supporting evidence, I must conclude that what matters is who writes the letter and not the information within it.

My last question concerns the JamCOVID app. Several colleagues, and other travellers, have met hell because of it. The App tends to become inaccessible at critical moments and causes some travellers to become stuck in transit, or forced to rebook airline tickets, and get back to somewhere to stay before repeating their COVID-19 test and reapplying. Sometimes this has to be done for entire families. This causes unnecessary spending, and sometimes lost job income. The JamCOVID app is about public health and is ultimately the responsibility of the MOHW, yet when asked what is going on, I am told that the MOHW blames the Passport, Immigration and Citizenship Agency (PICA). If the MOHW believes that PICA is the problem, why is the MOHW not insisting that PICA fixes the JamCOVID app?

Garth A. Rattray is a medical doctor with a family practice. Email feedback to columns@gleanerjm.com and garthrattray@gmail.com.