Tony Deyal | Going for the gold! 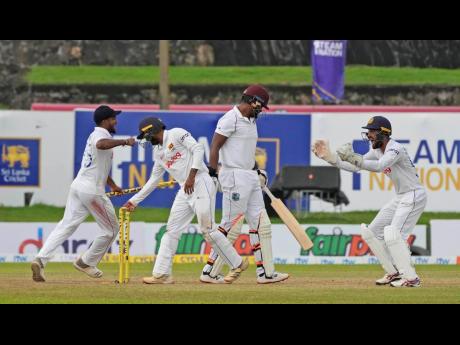 All that glitters is not gold, unless it is around the neck of someone playing cricket for the West Indies. In the same context, when you see the present West Indian cricketer in his ‘shades’ or sunglasses with the lens facing the back or top of...

All that glitters is not gold, unless it is around the neck of someone playing cricket for the West Indies. In the same context, when you see the present West Indian cricketer in his ‘shades’ or sunglasses with the lens facing the back or top of his head, and his cap pointed to the side, with the fancy boots and a big waterproof watch when fielding or batting, which he uses to text his friends and supporters, you have immediate proof that clothes do not make the man.

In fact, most of them prefer video games to reading, and so, to add another synonym, are unable to judge a book by its cover or any other part of it. Even the scorebooks are not their favourite reading, mainly because they have more ‘outs’ than ‘ins’ when batting and more ‘ins’ than ‘outs’ when bowling. The only scores they are looking for most of the time are with women.

I would have loved to know that, in the case of West Indian cricketers, appearances are deceptive and would not judge them by how they look or even how they behave, but insist that it is what is inside them that counts. However, when I remember my own experiences in the days I was involved in regional cricket, I know that it was, and might still be, marijuana in some of them. Also, many of them, unless they are batting with a watch that has a built-in calculator, generally find it almost impossible to count how many balls are left in an over, or even how many minutes there are to the lunch break or close of play.

Why am I so harsh on West Indian cricketers? After all, some have degrees and they all attend training sessions and are even left out when they fail fitness tests. The only person who seems to have passed every fitness test is Rahkeem ‘Jimbo’ Cornwall, who weighs about 140 kilos or roughly 309 pounds. This is part of the self-deception that applies to the board, selectors and players. From way back, the media and, even worse, the Cricket Board officials, have seen light at the end of the tunnel even when it is a mere glimmer of individual ability that is capable of helping you put your key in the door but not able to light the pathway ahead for you. Unfortunately, the blaze of illumination that they see inevitably turns into the Mauritanian Mineral Train which is up to 1.8 miles in length with over 200 freight carriages. It takes a long time coming or going.

I was watching the West Indies play a Test match against Sri Lanka last Wednesday morning and switched off when they were six wickets for 18 runs and needing, in all, 348 runs to win. Brathwaite, the captain, who made duck after facing 14 balls, walked slowly out, and the light that the West Indies Board had seen in selecting him to lead the team turned out to be worse than a train. It was a chain around his and their necks that bounced all the way back to the pavilion.

NO HOPE OF RECOVERING

We’ve come a long way from “cricket lovely cricket” and I thought of the old and good times I had then, watching Weeks, Walcott and Worrell (the Three Ws), Garry Sobers, Collie Smith, Rohan Kanhai, Laurence Rowe and Brian Lara – all of them worth sitting in the grass of the Queen’s Park Oval, the sun blazing hot, and shouting, clapping, jumping up and down in delight. This is why I went back to some of my columns, some since 1993, to remember what we had been and what we have lost and, from all that I have seen so far, both as the corporate secretary of the West Indies Cricket Board and now as a TV viewer, have absolutely no hope of recovering, at least in the near future.

I started with the jokes since I badly needed some comic relief, something that I get a lot of from the commentators. I remembered, “Hooper bats well with a tail” and the former Australian captain, Richie Benaud, saying of a batsman, “He’s usually a good puller - but he couldn’t get it up in time.” I joked to a friend, “Story of my life”, and left it at that. When during a Test Match at Lord’s there was a streaker who was eventually held and marched out of the grounds, Benaud announced dryly, “There was a slight interruption there for athletics.” Tony Grieg, former England captain who once spoke of making the West Indies team “grovel” until he paid for it, claimed that Clive Lloyd was “talking to his slippers” and that “Marshall is bowling with his head.” Grieg once anticipated what an Australian player would do, “In the back of Hughes’ mind must be the thought that he will dance down the piss and mitch one.” Jim Maxwell, the Australian commentator, described this fantastic shot, “Chappell just stood on his feet and smashed it to the boundary”. Jack Potter claimed another anatomical improbability. “It was close for Zaheer. Lawson threw his hands in the air and Marsh threw his head in the air.”

The legendary Brian Johnston had warmed up in previous innings with gems like, “Ray Illingworth has just relieved himself at the pavilion end”, “The bowler’s Holding, the batsman’s Wiley” and “Welcome to Worcester where you’ve just missed seeing Barry Richards hitting one of Basil D’Oliveira’s balls clean out of the ground”. Then came his greatest moment. In 1969, New Zealand was playing England at Lord’s. New Zealand batsman, Glenn Turner, was hit in the groin and collapsed in pain. As the television cameras focused on the unfortunate batsman writhing on the ground, Johnston was careful to describe the accident in very circumspect terms. However, when Turner returned to the wicket to take the last ball of the over, Johnston announced, “Turner looks a bit shaky and unsteady but I think he’s going to bat on - one ball left.” This reminded me of Donna Symmonds, the first female commentator we had. She knew the game well and was excellent in her descriptions of play but if the great Johnston could do it, who was she? This is why I remember her rationale for Patrick Patterson being dropped from the team, “No balls! No bails!” or Phil Simmons bowling, “He’s quite stiff you know. Quite stiff!” Given the need to discipline the present team and the selectors, Phil has to be even stiffer.

Having unchained my heart and set it free, I became a bit less upset by the West Indies team and decided, despite all their gold chains and finery, to say no more. After all, while truth is silver, silence is gold – chains and all.

Tony Deyal was last seen saying that the gold-chain business is not and may never be over because, in cricket, even though it’s said to be over it is never really over, since it is generally the start of another over,which does not mean that when that over is over the whole thing would really be over. Send feedback to columns@gleanerjm.com