France to consider some autonomy for Guadeloupe 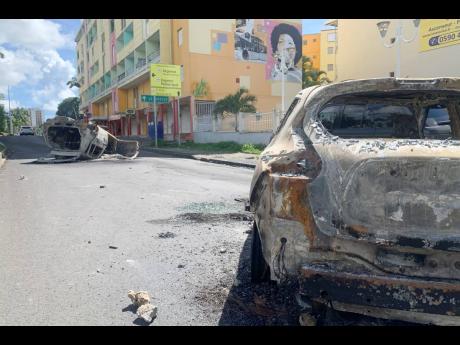 AP
Charred car are pictured in a s street of Le Gosier, Guadeloupe on Sunday, November 21, 2021.

France’s government is offering to discuss some autonomy for the French Caribbean island of Guadeloupe, which has been racked by virus-related rioting and strikes that reflect long-running frustrations over inequality with the French mainland.

Guadeloupe uses the euro currency and has close political ties with the mainland. But high unemployment in Guadeloupe and nearby Martinique, high costs of living and lingering anger over historical abuses have prompted some local officials to demand change. Both Guadeloupe and Martinique are overseas departments of France.

“Some officials have asked the question of autonomy,” Lecornu said in a televised address last Friday night to Guadeloupe residents. “According to them, Guadeloupe could manage itself better” than it is managed from Paris, and they notably want more autonomy to manage health-related issues locally, he said. “The government is ready to talk about it.”

He denounced rioters whose pillaging is hurting local merchants and workers, and whose road barricades are preventing some patients from getting medical treatment and forced schools to close. But he also acknowledged “structural issues” behind the anger, and called for a “collective” response.

The recent tensions in Guadeloupe and Martinique started because of France’s obligatory vaccinations for health care workers, and nationwide health pass to get into restaurants and other venues. To get the pass, people need to be vaccinated or show proof of a negative test or recent recovery from the virus.

Most medical personnel in Guadeloupe – 85 per cent – have had at least one dose. But uptake in the broader population remains limited, at 46 per cent of the adult population compared to 89 per cent on the mainland.

Anger and resentment over the government’s handling of a toxic pesticide called chlordecone – used for years in the French Caribbean after it was banned on the mainland and in the United States – have fuelled mistrust in the government’s COVID-19 vaccine polices and the central government in general.

Chlordecone, used mainly in banana fields, is blamed for record levels of breast and prostate cancers in the region, and experts say it will remain in polluted soils for the next 700 years.

Misinformation about COVID-19 vaccines shared on WhatsApp or Telegram groups has also fed scepticism in Guadeloupe and Martinique.

For the four months since the mandatory vaccine for health workers and health pass rules were announced, demonstrations have multiplied by several trade unions. They want the government to abandon the measures, or at least adapt them for overseas territories.

Feeling they hadn’t been heard, unions launched a general, indefinite strike on November 15 – the deadline for health workers to get vaccinated or risk suspension without pay. Anger erupted into rioting 10 days ago, and in Pointe-a-Pitre, the island’s largest urban area, clashes left three people injured, including a 80-year-old woman hit by a bullet while on her balcony.

The French government on Friday decided to delay mandatory vaccinations for health care workers in the region until December 31.

Meanwhile, the protesters’ demands have spread to include higher salaries and jobless benefits and the hiring of more teachers.

A third of the Guadeloupe population lives below the poverty line, and the unemployment rate is 17 per cent. The cost of living, meanwhile, is higher than the mainland because the island relies heavily on imports, yet salaries are lower.

Water supplies have been a major problem in recent years because of obsolete pipes, that leaves some residents without water for hours at a time – or even up to a week.