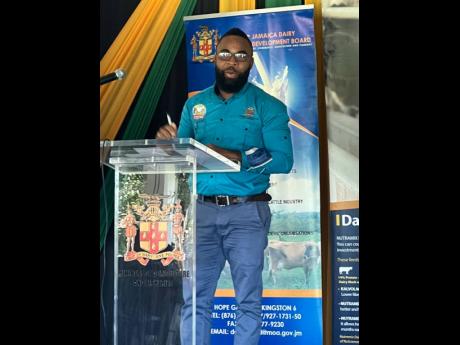 Six years after an initial attempt by the Ministry of Agriculture and Fisheries to increase the gene bank of cattle and goats, it has again embarked on a three-year livestock genetic improvement programme, but this time with stricter measures to...

Six years after an initial attempt by the Ministry of Agriculture and Fisheries to increase the gene bank of cattle and goats, it has again embarked on a three-year livestock genetic improvement programme, but this time with stricter measures to guide the research process.

The Jamaica Dairy Development Board, JDDB, is spearheading the project that will see some 2,200 local cows and 150 goats being inseminated with select semen and embryos that are known for their high level of milk and meat production.

Nutramix, a member of the Caribbean Broilers Group, has been selected as the supplier for the genetic materials following a two-year-long bidding and procurement process. The company will also provide breeding technology services.

Another 150 genetic materials have been procured for the Jamaican Creole breed of goat.

JDDB has earmarked $54 million for the programme which is expected to improve milk production of cows, and the meat production of both cows and goats. Special attention will be on cattle under the programme, as Jamaica tries to reduce its dependency on imported beef, milk and dairy products.

Jamaica has seen marginal growth in its milk production since the start of the campaign, rising from 12 million in 2016 to little over 13 million litres at the end of 2020.

On average, the local cow produces 6.3 litres of milk per day. The livestock genetic improvement programme is targeting up to 15 litres per cow, per day, from the high-yielding procured genetic materials over the next three years. When the programme ends, the JDDB will assess the need for its continuation.

“The gene pool is so close for herds like the Jamaica Braman that they bordering on inbreeding. Normally when the gene pool gets too close in animals the productivity goes down and what you might find happening is the animals get smaller or they might not show the characteristics that were outlined in the first breed,” Devon Sayers, project coordinator at the JDDB, told the Financial Gleaner.

In recognising the problem, the Cattle Breeders Society of Jamaica – a group of private breeders – has opened the herd book, Sayers said, allowing for the registration of animals that are not from Jamaica, or of a gene pool that is not already in the herd book.

The programme replicates an insemination project juice maker Trade Winds Citrus started last year, after failing to secure import permits for a new high-yielding breed of cows from Costa Rica, on concerns that the local herd would be at the risk of being infected with bovine spongiform encephalopathy, or BSE, which is popularly known as ‘mad cow’ disease.

Trade Winds acquired 230 local cows in 2020, around the same time it acquired the assets of Jamaica Beverages Limited, marking its entry into the milk market. Since then, the company has been conducting its own insemination process with Gir and Holstein semen to improve production quantity. It has around 400 cows on its dairy farm;, and is aiming for output of one million litres of milk, annually.

“I’m very happy to hear that Government is moving with the programme. I don’t have details of the project as yet, but we are willing to participate as long as it aligns with the growth plans of our company,” Trade Winds CEO Peter McConnell told the Financial Gleaner.

It’s not the first time that the ministry has taken steps to conserve and multiply the four breeds of cattle. The first test began in 2015, when the ministry had embarked on an embryo transfer programme in which a mature cow was treated with hormones to produce multiple eggs.

A number of calves were born from all four Jamaican breeds, including the first Brahman calves produced by the method. But there were challenges with the programme, the biggest of which was the inability to monitor and conduct research activities on the calves from failure of the farmers to register the animals with the Cattle Breeders Society.

The issues also extended to the availability of competent personnel, equipment and supplies, the acquisition of the latest technology, alongside praedial larceny.

“This is new programme is not a free-for-all. All breeders wanting to benefit from the programme will be required to complete an application form after which the JDDB will conduct site visits to see if what the farmers say is true and whether the farmer has the capabilities,” Sayers said.

Applications will open to farmers registered with the Cattle Breeders Association, the Small Ruminants Society or Rural Agricultural Development Authority, RADA, next month.

Diary farmers, whether large or small, are required to have good nutrition processes and animal husbandry in place to be accepted into the programme, technical areas both RADA and JDDB have been working in with farmers over the past 10 years.