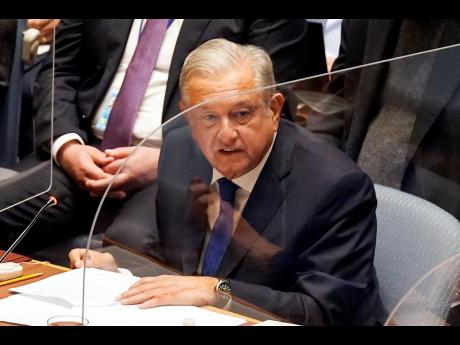 The administration of Mexican President Andrés Manuel López Obrador issued a broad decree Monday requiring all federal agencies to give automatic approval for any public works project the government deems to be “in the national interest” or to “involve national security”.

The decree published Monday sidesteps all environmental, accountability and feasibility review processes, and gives regulatory agencies five days to grant a year-long ‘temporary’ approval for anything the government wants to build.

The agencies would then have a year to grant definitive approval, by which time the projects would presumably already have broken ground.

López Obrador has been known for building huge projects. For example, he started building a 950-mile (1,500- kilometre) ‘Maya Train’ line that will run in a rough loop around the Yucatan peninsula.

Though the area has abundant Indigenous communities, jungles, wildlife and archaeological sites, the project was rushed through with little in the way of consultations, feasibility studies or environmental impact statements.

But Monday’s decree by the Interior Department would simply do away with such requirements.

“This is serious. This is severe. This needs to be resisted,” security analyst Alejandro Hope wrote on his Twitter account.

Leonardo Núñez, a researcher at the non-profit group Mexicans Against Corruption, called the decree “extremely dangerous”.

The decree states that “the projects and works carried out by the Mexican government associated with infrastructure in the areas of communications, telecommunications, customs, borders, water works, the environment, tourism, health, railways and everything having to do with energy, ports, airports ... are declared to be in the public interest and a concern of national security”.

López Obrador is big proponent of fossil fuels, and has ordered the construction of one large oil refinery and the upgrading of others.

But the Maya train is perhaps his most ambitious effort. It is intended to connect Caribbean beach resorts to the peninsula’s interior, with largely Indigenous populations and ruin sites, in a bid to stimulate economic development around its 15 stations. The government says it will cost as much as $6.8 billion, but others say it will be much more.

Critics say López Obrador rammed through the project without adequate study of its effects on the environment, underground sinkhole caves known as cenotes, and ruin sites.

Some stretches of the route already have tracks, and the institute said some artefacts had already been disturbed by railway construction decades ago. But other stretches are to push through sensitive jungle terrain, though they will parallel existing roads or transmission lines. Even where an old railway line exists, the project would imply updating tracks and building new stations.

Some Mayan communities have filed court challenges against the project, arguing it will cause environmental damage. They also say they were not adequately consulted about it or they will not share in its benefits.