Netanyahu in court as parties weigh in on his fate 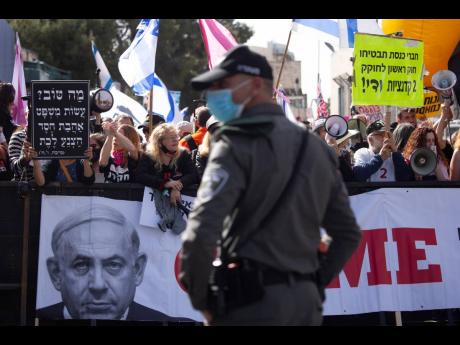 AP
A police officer stands guard in front of protesters as Prime Minister Benjamin Netanyahu’s motorcade arrives at the District Court in Jerusalem for a hearing in his corruption trial yesterday.

Prime Minister Benjamin Netanyahu’s corruption trial resumed on Monday, with a key witness painting a picture of an image-obsessed Israeli leader forcing a prominent news site to flatter his family and smear his opponents.

The testimony came as Netanyahu’s chances of securing another term in office following last month’s parliamentary elections appeared to be dwindling in high-stakes political talks hosted by the country’s figurehead president just a few miles away.

In a nationally televised address, Netanyahu accused prosecutors of persecuting him in an attempt to undermine the will of the voters and to drive him out of office.

“This is what a coup attempt looks like,” he said.

Taken together, the court testimony and political consultations pointed to an increasingly uphill struggle for Netanyahu as he fights for his political life.

In a post-election ritual, President Reuven Rivlin was consulting with the various parties elected to parliament before choosing a candidate to form a new government.

With both Netanyahu and his main rival, Yair Lapid, failing to gain the support of a majority of lawmakers, Rivlin faces a difficult task, and the country risks plunging into an unprecedented fifth consecutive election campaign in the coming weeks.

Late on Wednesday, Lapid called on the country’s anti-Netanyahu factions – a patchwork of parties with vast ideological differences – to put aside their differences and form a unity government. He said he had even offered Naftali Bennett, leader of a small right-wing party, a power-sharing rotation, with Bennett serving first as prime minister.

“Anyone who saw Netanyahu’s reckless performance today understands he can’t carry on in his job,” Lapid said. “We know how to bridge divides. We don’t hate one another.”

Netanyahu has been charged with fraud, breach of trust and accepting bribes in three separate cases. Monday’s proceedings, the first in two months, marked the beginning of the evidentiary phase, in which a long line of witnesses are to take the stand against the prime minister.

The session focused on the most serious case against Netanyahu – in which he is accused of promoting regulations that delivered hundreds of millions of dollars of profits to the Bezeq telecoms company in exchange for positive coverage on the firm’s popular news site, Walla.